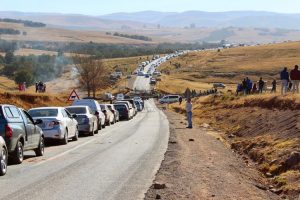 Residents of Ngcobo in the Eastern Cape blocked the R61 to Cofimvaba demanding that the provincial government fix their roads.

The protest started at 3am and went on until lunchtime. School transport and taxis were prevented from entering or leaving the area.

Two weeks ago residents closed a gravel road. Residents said after that protest Ngcobo municipal manager Vusumzi Phoswa and Mayor Lizeka Bongo-Tyali had promised to bring Tikana to address residents within 24 hours. When she had not come after a week, a decision was taken at a community meeting (on Saturday) to close the R61.

A community leader who did not want his name used said the community was tired of empty promises. He said the gravel roads had last been fixed in 1992.

“The province must come here. We want them to tell us when they are going to fix this road. They must give us a date,” he said. In support community members started counting the people involved in car accidents in their area.

Phumlani Voyiya, a grade 10 learner from Ngubesizwe High School, said he had missed his maths literacy test because of the protest. He said he hoped his teacher had heard about the protest and would allow him to write the test later.

Elias Maduna said he had been stuck in traffic on the R61 for almost an hour on his way to Lusikisiki. “I understand the community’s frustration. What can people do? Violence is the only language our government understands.”

When GroundUp arrived, police were firing rubber bullets to disperse the crowd.

Phoswa said the municipality had failed to communicate with community members. He acknowledged that the gravel road the residents wanted fixed was in a bad state.

The protest was called off after community leader Wandisile Mendela received a call from Tikana via the police on the scene. Mendela put the phone on loud speaker for all the residents to listen to Tikana.

Tikana asked residents to give her more time and promised to come next week.

Residents took turns on the phone, telling her people were dying on the gravel road. Some said they would not vote for the ANC if Tikana did not come.

Police spokesperson Namhla Mdleleni said no arrests were made.