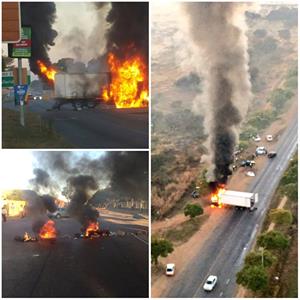 BLACK uncivilized pro-ANC communist rioters have turned Pretoria into a cauldron of burning inferno. The violent protests in Pretoria have spread to Atteridgeville last evening, as an angry group has set two dozen buses alight and blocked the main entrances into the township with rocks and burning tyres.

Reports suggest entrances into Atteridgeville, the current  ANC Mayor Kgosientso Ramokgopa’shome town, are blocked with burning tyres and rocks. Protests have flared up in the city over the communist  African National Congress (ANC)’s decision to put forward Thoko Didiza as its mayoral candidate. Putco Bus Company has retracted its earlier statement that 20 of its buses have been burnt and have revised their number to two. Putco spokesperson, Tshepo Tsotsotso, said, “Some of our buses have been affected in Mamelodi and we are still quantifying the damage. This means our passengers may be affected tomorrow.” The bus company says it’s working with law enforcement to ensure its buses and passengers are safe on the morning commute tomorrow. At the same time, PRASA has confirmed their buses are among those burnt during the violent protests in Pretoria but cannot give an exact number as yet.

THIS IS SOUTH AFRICA – THIS IS WHAT THE WORLD AT LARGE DOES NOT SEE AND DO NOT WANT TO KNOW ABOUT. IT REMINDS THEM OF THE DISASTROUS MISTAKE THEY MADE IN 1994, SUPPORTING THE HANDOVER OF SOUTH AFRICA TO THE COMMUNIST ANC (AND NELSON MANDELA THEIR LEADER)

BURNED-OUT BUSES -A SILENT REMINDER THAT SOUTH AFRICA IS NOT THE “DEMOCRACY” THE WORLD HAILS IT TO BE.

Pretoria once was a beautiful capital,  commonly referred to as the “Jacaranda City“, but with the communist ineptocrats in control, Pretoria turned, as with Johannesburg,  into a third world slum by the hands of a careless regime, unruly black rioters that permanently feel “unhappy”, Nigerian slum lords,and all kinds of illegal African aliens turning once clean streets into back-street “spaza”,  selling all kinds of legal and illegal commodities. Most whites long time ago already have moved their businesses out of the Pretoria central district. Pretoria was invaded by Africa. Pretoria now is burning, burning because millions of uneducated black hooligans are venting their typical African ” we demand” frustrations out on the city and its services. South African blacks have a disgusting culture of being world leaders in destruction and chaos. They have a culture of being on riots and strikes permanently. They systematically have chased away investors and businesses. They have seen to it that the country has been turned into a hell-hole of hate and crime.  Fueled by their despicable communist  “leaders” in control, they go on the rampage on a daily basis. Who will pay for their utter uncivilized destruction?  They do not care, for their illegal rulers once again will see to it that they receive their monthly social  “grants”  and free services. If not, there will be some more chaos and burning.  South Africa is in a state of turmoil. Pretoria is in a state of turmoil and an inside pot of civil war is boiling over.  Only time until this turns into a full-scale civil war.

FLASH POINTS WHERE VIOLENT RIOTS ARE IN PROGRESS AROUND PRETORIA

NOW, You might remember that on May 23 2016, just before the Pretoria riots, The South African Broadcasting Corporation (SABC)  strangely enough, took a decision not to publicize any content displaying violent service delivery protests in various parts of the country. Their excuse was that news coverage will just accelerate the violent protests. That may be true, but ALSO what could be true is that the SABC was INSTRUCTED not to air any protests in order for a silent war to start and take on momentum across the country without being noticed! When will the electronic media “suddenly” decide to follow suit?  Somehow the ANC and their communist henchmen are not to be trusted…especially with their evil ally, BRITAIN, that sent a “special envoy” to visit South Africa a couple of months ago to “ensure” that the ANC stays in power? . They want a war and somehow they will instigate it. The CIA and Britain want to turn South Africa into another Syria, that the chaos gives them a very good opportunity to sneak in their evil plan while the populace’s eyes are focused on the riots. Eerie enough, you do not hear ONE sound from any ANC ‘spokes person, MP, Minister or anyone about the riots in Pretoria. Something’s brewing before the coming elections and it DEFINITELY is not mutton stew! They have become VERY quiet in such a time of turmoil– don’t you think? (Link) 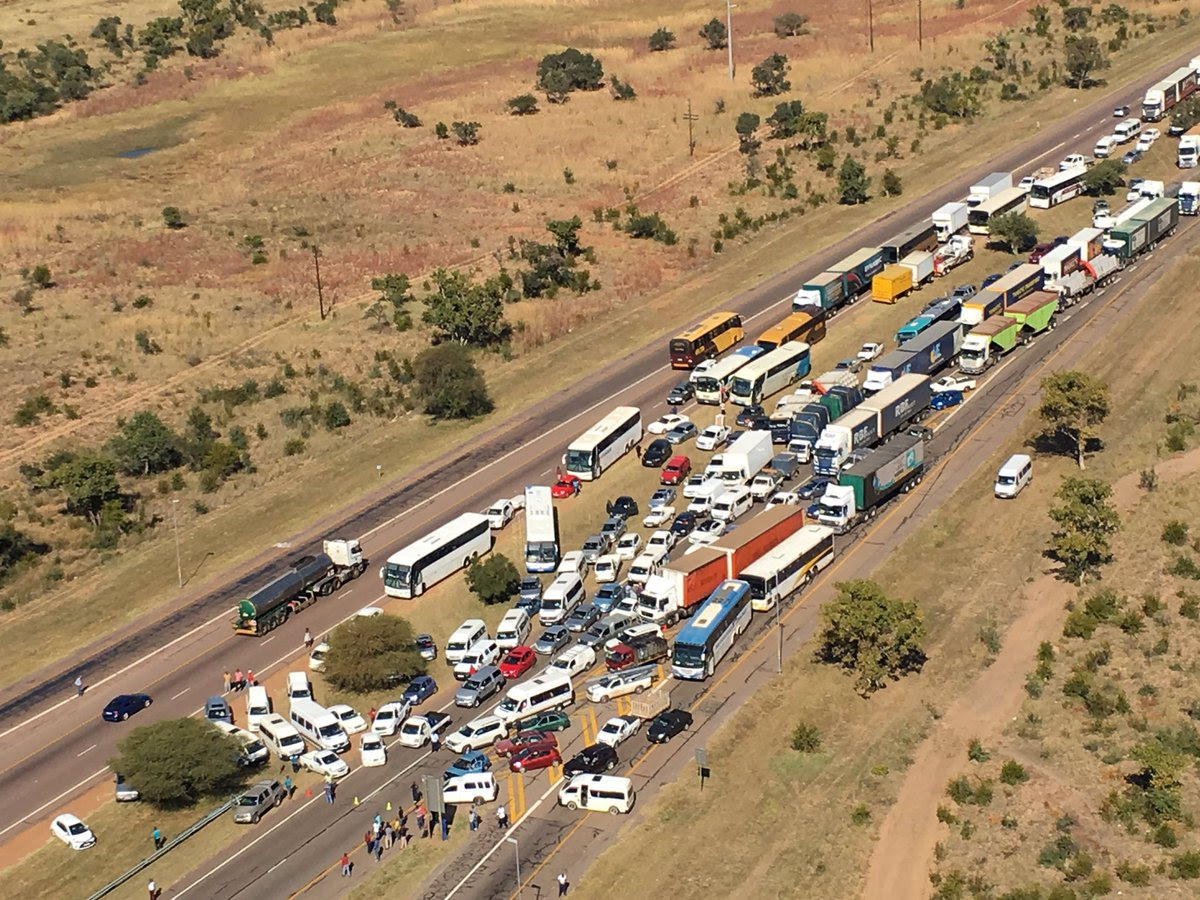 THE N1 NORTHBOUND CLOSED AND IN CHAOS 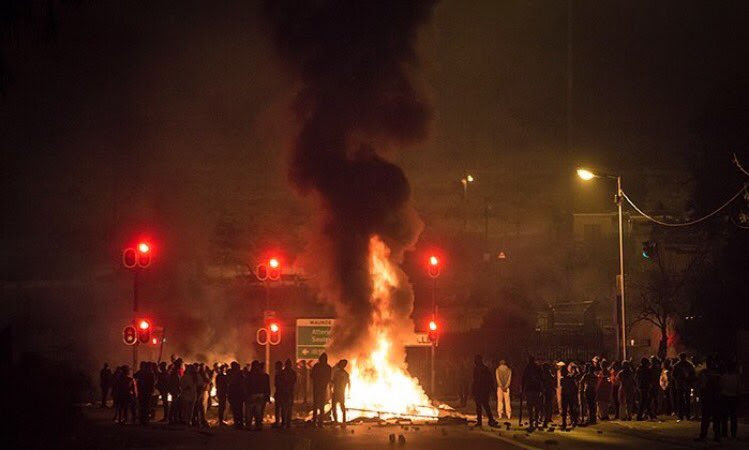 BURNING TIRES IN THE TOWNSHIPS AND….

People in Pretoria should be VERY wary of the situation in their city. It appears that all the main roads leading in-and-out of Pretoria are systematically being blocked-off,  as if someone is organizing the city to be boxed in. All main routes towards Pretoria, the N1 highway at the Toll Plaza, the Western entrance from the black township Atteridgevile, Eastern entrance from Brits, as well as the entrance from Mamelodi Black Township Have now been effectively sealed off by the rioters. Only the N1 Southbound to Johannesburg appears to still be open.We do NOT say that this is the case, but the “mayoral excuse” could just be a smoke screen for something much more sinister. White Nation just want to warn their South African white readers in the Pretoria region to be alert and vigilant.

Today it is Pretoria, tomorrow it will be Johannesburg… then Bloemfontein… Cape Town… Durban, and so the destruction under the communist ANC and their international criminal handlers will go on and on. The Tunisian spring is creeping ever so close. These are not “normal” riots. this is a well-orchestrated conspiracy by dark forces from beyond the oceans.  Rarely a day goes by without violent riots in South Africa, BUT that is “democracy”, where everything is just “acceptable”, as long as you do not smoke and are not white. Other than that you can turn the bloody country bloody down- IF you are black!