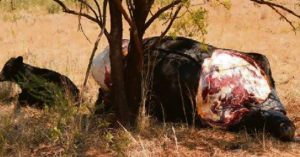 If it is not farmers and their family who are mutilated and murdered, it is cattle that suffer and pay for  acts of terrorism in South Africa.

If it is not the white boer and his family who are violently tortured and murdered, it is their cattle that suffer and pay for terrorism. Meanwhile, businesses in South-Africa is suffering severely. Protest actions are crippling the economy and rock-throwing barbarism on the country’s roads are dominating everything around us.

Dear Sir and Madam the farmer – for whom do you actually work for if your cattle are stolen, slaughtered and sometimes mutilated?  Not to mention that sometimes the criminals simply drive away with your cattle, poultry and other animals without paying 1 cent for it as if it were their own.

In this article one farmer is mentioned, who has suffered more than once, but thousands of farmers are daily under attack where their cattle or poultry are stolen or if not mutilated and killed. Meanwhile, farmers and their wives are directly attacked and left behind, mutilated.

During October 2012, some dead carcasses, severely bloodied, just simply jumped on the back of a bakkie. What kind of policeman believes such utter nonsense? The driver of the bakkie originating from Soweto could also not explain how the “carcasses” landed there and pleaded not guilty to theft charges.

That same morning, John Boon discovered that several of his stud cattle had their tendons cut off and was left mutilated in the veld, which included cows. The parts and carcasses on the bakkie that also belong to Boon he identified at the police station because it was branded. Farmers are obliged to brand their livestock and Boon identified his branding marks on these cattle.

Lovely if there are laws, but it is never applied. Does it only apply if whites are involved? How does any law help us today if it is not implemented?

So far no prosecution at all could be found in the case, not on the Internet or media – so it is concluded that the government of SA did nothing about these incidents, just like farm murders occurring in our country. Or is it just not important to mention it?

Sometimes murderers are traced and prosecuted and sometimes accused people are caught but then the case just disappears into thin air, due to lack of information and evidence. If you look at all the corruption taking place in South-Africa the crime is simply not being addressed. How many cases have never been 100% finalized? It is an open question that and we do not have the correct answers.

Then on the other hand, how many immigrants really occupy this country? No one knows – but there have been reported that there are more immigrants in South-Africa than there are citizens. This can be true as there are over 25 million black and Khoi San living and operating in the old homelands today, better known as Trust areas or CPAs. Immigrants mostly live around our towns and cities and expect free accommodation, electricity, schools, medical, etc.

Read the original article posted on 09 Maart 2019 in Afrikaans at Volksvryheid
This report does not necessarily reflect the opinion of SA-news.