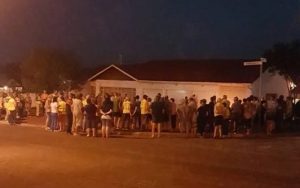 An elderly businessman Hans van Rooyen (83), from Nigel on the East Rand was killed in his home on Tuesday afternoon.

It is alleged that the crime was committed when van Rooyen, who owns a workshop in the town, went home for lunch around 2 p.m.

The neighborhood watch member gave the vehicle registration number to the police, after which it was determined that it belonged to Van Rooyen. One of the neighborhood watch members was sent to Van Rooyen’s residential address, but upon his arrival the security gate of the house was open, and Van Rooyen was found on the kitchen floor. Harris said Van Rooyen’s hands and feet were tied up, he was brutally assaulted, but the cause of death remains to be determined.

Harris says that van Rooyen was loved in the community and will leave a big void. More than 100 community members gathered in front of his home with candles and flowers. His funeral will take place on Friday from the NG Church South in Nigel.