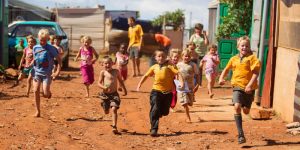 According to the 2019 South African Child Guage, 1 in every 31 children in the country dies before reaching the age of 5. Most of the children die due to preventable diseases. ANC regime neglects the children of our country.

While many holidaymakers are in a holiday mood and excited about Christmas Day approaching, as in the rest of the year, a tragedy plays out around us. Children are dying unnecessarily.

In South Africa, we are regularly reminded that youth is our most precious possession and is the future of tomorrow. But how much do we invest in them if one in every 31 children dies of most common preventable diseases before they are five years old?

In a recent report in Cape Town, the “South African Child Gauge 2019” deals with the health of children and adolescents. In this document, the 14th of its kind was drafted under the direction of the Children’s Institute at the University of Cape Town with partners such as the University of the Witwatersrand and the Center for Excellence in Human Development. A total of 70 researchers worked on the voluminous scientific report of more than 260 pages.

According to the report, children are still dying of malnutrition, a horrifying thought when you think of Christmas in its middle-class excess.

Network 24 recently published the findings and it is as follows: Every day, 44 children in South Africa die from diarrhoea, pneumonia, neonatal conditions, malnutrition, injuries, road accidents, HIV and violence.

Children are still dying of malnutrition, a horrifying thought when you think of Christmas in its middle-class excess. As many as 27% of all children under five in the country suffer from this condition. They are already born with a backlog (13%) because their mothers suffer from it too.

As many as 60% of the 12.8 million children live below the poverty line – this is in households where per capita income is less than R1 183 per month. The child allowance significantly helped lift children out of extreme poverty, as this figure was 78% in 2003. It is still mainly women who look after children: mothers, aunts, grandmothers and sisters, yet 41% of women are unemployed.

The problem with malnutrition, according to the report, is that it greatly increases children’s chances of dying from neonatal diseases and infections. And it causes impaired motor and cognitive functions that cause the child not to reach his full potential. It literally hinders growth – as many as 21% of children do not grow properly.

Prof. Maylene Shung King of the Health Policy and Systems Unit at the School of Public Health and Family Medicine at the University of Cape Town says malnutrition impedes a child’s cognitive development, education and eventual opportunity to find work. It also increases their chances of being overweight or suffering from obesity.

“The risks of years as a child and adolescent have an impact on your later life. It literally turns genes on and off. What happened earlier in your life matters later, ”she says.

The genes you get from both your parents are a kind of blueprint for your development. It cannot change, but how it is turned on and off, so-called epigenetics can change especially in response to your environment and good or bad events. The epigenetic response changes the way genes are expressed and it lays down pathways that are difficult to change as one gets older.

The latest risk estimate is that 38% of children are at risk of not developing properly. But that figure is lower than it was a decade ago.

Too many children in South Africa grow up in poor conditions that leave them behind for the rest of their lives. Photo for illustration. Photo: Getty Images

Although there is limited data in South Africa, concerns about the psychological health of children and teens are increasing.. By the age of 14, half are psychiatric illnesses and si
. By age 14, half of the psychiatric illnesses and psychological problems were already established and by 24 years in three-quarters of cases, the report said. The high levels of violence and poverty cause up to a third of pregnant women to suffer from depression.

It may not sound like that, but your psychological well-being and ability to read has a lot to do with each other. As many as 78% of children in Gr. 11 cannot read with understanding and the report wants the relationship between this issue and violence to be strong.

“The route from an early childhood insult to murder as an adult, or a struggle to read and leave school early and develop a psychiatric condition, is many times long and complicated,” the study says.

There are indications that between 10% and 20% of children and adolescents suffer from psychological conditions, but there is almost no help for them. Only three provinces have child psychiatrists in the state sector and the percentage of children admitted to hospitals for this does not match the true state of affairs. In most schools, there are no therapists available, and children are only severely punished or sent out of the classroom.

It is precisely children who experience violence themselves, including sexual violence, who are at greater risk of developing psychological conditions and then using drugs. They eventually leave school, increasing the risk of drug addiction and perhaps gang involvement. Everything is related, and one leads to the other.

We will have to do a lot more to really give children a better, fairer opportunity to prepare them for adulthood.

The country’s children are hungry, sick, neglected and killed as pedestrians in the road. They are not safe. They suffer from trauma – because they see and experience violence themselves.

Children should not only survive but be given the chance to thrive. We will have to do much more to really give them a better, fairer opportunity that prepares them for adulthood and gives them a chance to find a job. They will have to become the center of development and healthcare.

It requires not only political will but also the cooperation of the entire community.