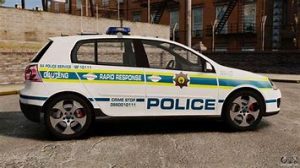 Rapid Response patrols in the Western Transvaal are equipped with the small Nissan NP200 pickup trucks with which they must chase the villains who flee with powerful cars.

The bakkies with their limited ability during a high pursuit cannot stand a chance to the fast cars nowadays owned by thieves, murderers and other villains.

In contrast, police doing patrols in the small towns, as the case in Mafikeng, use the high-speed Volkswagen Golf GTi models.

Apparently, several letters to police chiefs were sent to point out the SAPS backward planning without any success and no response given by the Headquarters in the past 18 months.

Allegations are being made that senior police enjoy the luxury of being driven around by members in a fast Golf GTi.

It is alleged that the police commissioner who heads the area is himself guilty of being taken around in a Volkswagen Golf.