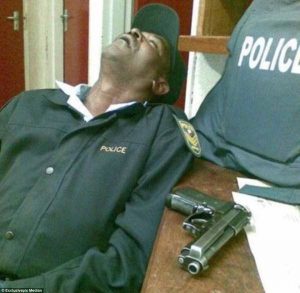 (Citizen reports:) Some former ‘anti-apartheid soldiers’ who are now in line for handsome increased salaries weren’t even alive during apartheid.

Trade union Solidarity on Wednesday revealed further damning evidence that proposed promotions for police officers who ostensibly fought in the struggle are highly questionable, given that so many of these officers in line for more money weren’t even alive or in adulthood during the struggle.

Sixteen of them are now dead, but that won’t be standing in the way of their police careers.

Solidarity has pointed out that the promotions are set to cost taxpayers nearly R650 million.

Among the 601 people who were supposedly Umkhonto weSizwe (MK) or Azanian People’s Liberation Army (Apla) soldiers during the fight against apartheid, six have already been fired from the SA Police Service (SAPS), 28 received golden handshakes and have retired, five have been medically boarded, at least 16 are already dead, 33 are older than 60 and have retired and another 15 have voluntarily resigned.

The dead officers’ families are in line to enjoy the “promotions” on their family members’ behalf thanks to increased pensions.

Solidarity said in a statement that in 2013 former MK and Apla members expressed unhappiness over not being in senior positions within the SAPS.

The union pointed out that among the hundreds of people identified for promotions, 178 of them would have been too young to be part of MK or Apla.

Others were not yet born.

“There are people who will benefit from the promotions despite them having been fired, being dead, given golden handshakes or being retired. Basically, people who are no longer in the police will benefit from positions they have never occupied. The amount of money that has been budgeted for these promotions is staggering. The taxpayer, over the next three years, will have to cough up R644m to pay for these promotions,” he alleged.

Solidarity served the SAPS with a legal notice to stop the promotions until its court review of the matter could be finalised, but claim police management simply chose to ignore it.

They would be launching an urgent court application to “have this entire mess stopped”.
The SAPS has chosen to ignore media requests for comment on the allegations