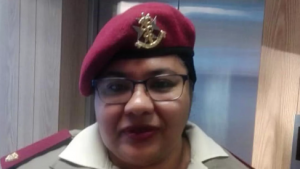 Major Fatima Isaacs, 47, appeared before a closed Military Court at the Castle of Good Hope on Tuesday where she was read her rights and formally charged.

She faces charges of disobeying a lawful instruction by her colonel after she refused to remove her headscarf.

The small black doekie is barely visible under the beret and does not obstruct any military rankings or insignia.

“She was served with a final written warning, but still refused to remove the scarf,” Mohamed told VOC News.

“The ranking officer then proceeded with the disciplinary hearing. There seemed to be disagreement amongst the different colonels and operational commanders.

“Some allowed her to wear a scarf, while others refused. This case has been coming on for a long time.”

Isaacs works at the Military 2 Hospital in Wynberg as a Forensic Pathologist.

Mohamed says the matter has been postponed to 7 August and her client will now face a formal military court where she can employ her own private legal team.

She says the Muslim Judicial Council has pledged their full support for Isaacs and will be attending.

Isaacs has been fighting for her right to wear her doek for 10 years and two years ago approached the MJC for help.

“When we meet with them, the SANDF officials are open to working on this issue. But it doesn’t seem to be filtering down to the seniors in the ranks,” he said.

He said many of the rules and regulations that exist in the SANDF are a legacy from the apartheid era and needed to be reviewed “as they are not in line with the Constitution”.

Taliep said the MJC has explained the Islamic position with regards to hijab and Isaacs’ constitutional rights to practise her religion.

They even suggested different styles of hijab.

“We believe sister Fatima has been more than accommodating and has been trying to meet them halfway,” Taliep said.

The SANDF did not respond to inquiries.

-Daily Voice
This report does not necessarily reflect the opinion of SA news.