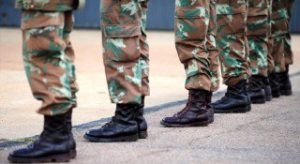 The South African National Army confirmed on Monday that eleven soldiers were found guilty in the Democratic Republic of Congo on charges of assaulting a 17-year-old boy.

The SANDC said it was a watershed case in a military court. A total of 16 members of the magistrate’s intervention brigade (FIB) of Operation Mistral in the DRC were charged for the first time under the Prevention and Combating of Torture Act.

The incident occurred in January this year.

Read the article in Afrikaans on Maroela Media