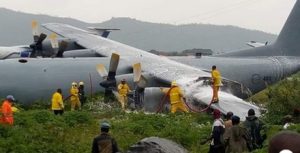 A South African Air Force plane crashed at Goma Airport in the Democratic Republic of Congo (DRC) on Thursday afternoon.

South African National Defence Force (SANDF) spokesperson Siphiwe Dlamini said the plane had been deployed in the Democratic Republic of the Congo as part of the United Nations Peacekeeping Mission (MONUSCO).

It was damaged after crash landing.

“The C130 from the South African Air Force was on its way back to Goma after delivering logistic supplies at Beni when the incident happened,” he said.

“Nobody was injured during the landing and a Board of Inquiry will be convened to investigate the circumstances surrounding the incident.”

Dlamini said more information would be released once it was available.

Videos on social media showed smoke rising from the plane.

Eight crew members and 59 passengers on board were all evacuated, it reported.