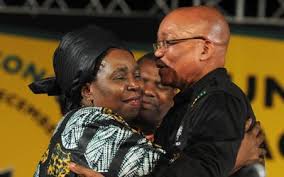 The SA Communist Party (SACP) issued a statement stating that Jacob Zuma intends to fire Cyril Ramaphosa as the country’s deputy president and replace him with his ex Nkosazana Dlamini-Zuma.

The SAKP further claims that Zuma wants to use a Zulu regiment (Anabutho) to protect him in his post as president.

The presidency, denied the allegations.

However, political analysts believe that the SACP is informed enough to issue such a statement with authority.

Zuma realizes that he is against the wall with his back and can limit Ramaphosa’s power and influence in such a way. In addition, more of a possible emergency condition is being spoken, especially as a result of the protests against Zuma.