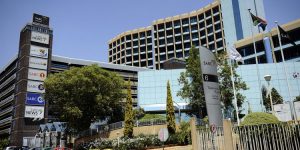 With uncertainty over whether the SABC will be granted a government bailout, there are now fears that the broadcaster could be forced off air.

Things are looking grim as far as the South African Broadcasting Corporation (SABC) is concerned, with fears that the national broadcaster is heading to a complete blackout.

Long-standing financial strife in the SABC has worsened in 2019, with recent reports suggesting that the broadcaster may not be able to meet one of its most basic obligations at the end of June – paying its employees’ salaries.

The latest report, from the City Press, paints an even darker picture, suggesting that the SABC could be forced off air completely.

In an effort to seek relief from its financial crisis, the national broadcaster met with Minister of Communications Stella Ndabeni-Abrahams and, according to the publication, it was stated in the meeting that a complete blackout was inevitable if the SABC does not receive urgent help.

This comes after the broadcaster applied for another government bailout, confirmed by Chief Financial Officer, Yolande van Biljon to be a sum off R3.2 billion.

According to van Biljon, the SABC owes its debtors close to R2 billion.

“In terms of debt, there is over a billion that is owed. If you add accruals, you come close to R1.8 billion altogether that is due and payable.”

Yolande van Biljon
Van Biljon added that, should the bailout be granted, it would rid the SABC of debt and significantly aid its day-to-day operations.

However, the City Press says that the delay in granting the blackout is due to negotiations with other state-owned enterprises.

“The delay in obtaining the government guarantee seems to be because the SABC is part of a collective of SOEs asking for a government guarantee/bailout”, the Broadcasting, Electronic, Media & Allied Workers Union (Bemawu) is quoted as saying by the publication.

Without the amount, the broadcaster cannot believe its doors will stay open any longer, and will have to close its doors.

A spokesperson for a well-known Afrikaans culture organization says the broadcaster can close its doors because the entity’s offers in Afrikaans are so small that no one finds any reason to switch to its channels.

The new begging action of the SABC should not be granted by the government, as it is now clear that the state-owned broadcaster does not have the ability to operate economically profitable.