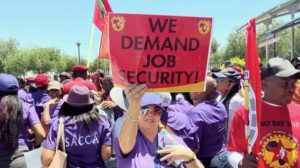 More than 3000 workers affiliated with Numsa and Sacca downed tools at SAA on Friday over a wage dispute and plans to cut more than 900 jobs, costing the airline about R52 million a day.

The interim chief financial officer of SAA Deon Fredericks, said the strike was pushing the struggling airline to unsustainable levels. “If this strike continues, we are running the risk of putting SAA out of business,” Fredericks said.

Even though they are working with Mango Airlines to accommodate as many customers travelling on domestic services as possible and refunding passengers their flights or travel with other airlines.

SAA is facing a crippling onslaught by the National Union of Metalworkers of SA (Numsa) and the South African Cabin Crew Association (Sacca). The national air-carrier is threatening the unions with legal action if they fail to retract comments that the safety of passengers cannot be guaranteed.

Over the weekend, Numsa said anyone flying with SAA during the strike was “endangering their life” as those working may not be sufficiently qualified.

Numsa and Sacca said the national carrier was using personnel with no relevant work experience in the maintenance and repair of aircraft and in the cabin crew area.

“They should be cleaning their house first and focus more on internal issues before worrying about what their competitors are doing. The competition has its own troubles as well,” Malik said.

“The passengers who threaten not to use SAA again will come back; industrial action happens everywhere in the world. Any possible equity partner will come if SAA is making money or if they want routes it operates on.”

Malik said the allegations of unqualified staff working during the strike was a “technical question”, as only technical people should know what was happening at the airline.

Fredericks said the unions’ allegations over the airline’s safety were malicious, adding that they had met with their lawyers yesterday morning to take legal action.

“We actually briefed our lawyers. We have given them all the information we have. We will meet with them so that we can start that action against the unions,” he said.

The South African Civil Aviation Authority (Sacaa) said SAA had provided it with contingency plans prior to the strike and assured the director of Civil Aviation that the airline would take all the necessary care to uphold civil aviation safety and security.

Sacaa spokesperson Phindile Gwebu said SAA had given the regulator assurances that all flights were being operated by qualified cabin and flight crew, and that all technicians attending to aircraft are appropriately licensed and rated.

“The process of conducting spot checks by the Sacaa, as and when necessary, is ongoing,” Gwebu said.

The air-carrier resumed operations on its international and six regional routes on Sunday, but domestic flights have remained grounded.

Nevertheless, the unions’ strike already cost SAA more than R250m, and with a bankruptcy record it could mean the end of the entity.

The ANC government faces a choice, whether to blame the SAA, or again, as in the past, to use the taxpayers’ money to pay for the poor management decisions that are made.

The end of the South African Airways hangs in the air, and this is in stark contrast to the past success story when savvy apartheid-era people managed the company with great success.

Thandeka Mgoduso, SAA chairman acknowledged that it is almost impossible to return to the current chaos caused by unions’ unreasonable wage demands.

Economists point out that the decline of state entities is partly attributed to the unions operating on only two elements, namely unfair and unrealistically high wage demands, and secondly, to start striking if their demands are not heeded.