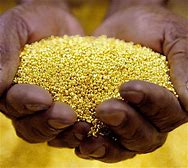 The Gold industry is under tremendous pressure in South Africa, and the main reason for this is attributed to blacks illegally extracting gold.

Heavily armed gold thieves working in mines are constantly on the lookout for potential threats, and claims that there are police officers working together complicate the task of law enforcement.

The illegal diggers trade the gold on the black market at as much as R690,000 per kilogram.

For over two decades, the industry has been struggling to stay afloat because of the illegal miners known as the zama-zama.

Where SA was the largest producer of gold, it has now fallen back to the third position, citing two reasons. The exploitation by the zama-zamas, and secondly, the unfair wage demands as well as labor practices, and unions’ persistent strikes have nearly hit the industry.