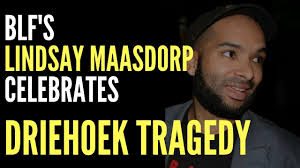 Perhaps this is not the country, but the people who live in South Africa who have become mentally unstable and spiritually ill.

If a bridge collapses and four schoolchildren die, its tragedy is indescribable, but if a barbaric racist then rejoices in the incident, it speaks of a sick spirit and even worse mind.

There is also something else that cannot be left unspoken with the ruling.

The remark speaks of a person who certainly does not know and accept Christian values, and is probably a child of Satan, because such hatred should not remain unpunished in this country.

Just as corruption, whose total extent has not been determined for a long time, is also an epitome of how people are committing them to envy, just as ill and despicable are the lies of the country’s president when he made the statement abroad that South-Africa are not experiencing any farm murders on whites.

For the past 25 years, the Westerner civilization have seen the looters continue unhindered with their devastating plundering of infrastructure and buildings as if it were “the right thing to do”.

But the ongoing looting and destruction will not stop as long as schoolchildren are allowed to burn down schools and other buildings and carry out robberies.

Similarly, corruption and fraud will continue as long as honest and hard-working whites are denied the right to be appointed to positions on merit of qualifications and experience.

As the country gradually moves into the abyss, the experts leave the country they love to look for a life where Western norms are still being applied.