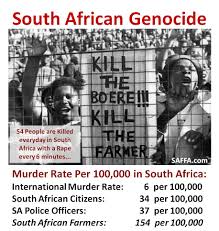 Here is the factual information for October and November 2019, the suspects in all cases are black African as far as can be established, and the victims are all white, except for one case, where the victim was an elderly colored lady.

These cases are only the most serious, there are hundreds of other incidents and many other methods n which our people are being decimated through deliberate negligence, especially in state hospitals.

We don’t have enough space or time to list all the attacks. So decide for yourself, interpretation is yours. Just don’t say you have not been informed or warned.

SEE THE NAMES OF  OUR PEOPLE MURDERED IN OCTOBER AND NOVEMBER 2019; Sadly the large majority of perpetrators of these crimes will remain unpunished…

2 Nov – Rina Spangenberg (86) raped and murdered in her home in Warrenton, Northern Cape.
2 Nov – Well known trail athlete Wesley Sweetnam (30) shot and killed by house invaders in his home at Noordhoek, Cape Town.
4 Nov – Jurgens Oberholzer (64) pushed to the ground in Bela Bela. He is taken to hospital in a shocked state and dies.
7 Nov – A client, only known as Oom Leon, shot dead by armed robbers at a computer shop in Queenswood Pretoria.
8 Nov – Francois Dennison (47) died 5 weeks after he was shot by home invaders at a security complex, La Montagne, Pretoria-East. He was shot 7 times, 3 in the abdomen.
9 Nov – An unidentified woman, 64 years old, shot 3 times by home invaders at Muldersdrift. She survives the incident. She was shot initially through the window, then the intruder broke in and shot her again.
12 Nov – Johnie Marx (78) found murdered, plastic bag over the head in Jeffrey’s Bay.
15 Nov – Isabel van Coller shot dead by 4 black male hijackers at a traffic light, Bramley, Johannesburg. Her body was then thrown from her car. The incident was captured on camera and widely shared, yet no suspect positively linked by Police.
17 Nov – Marie Woolrich (55) suffered a heart attack and died from fright during a home invasion at her home in Pinetown.
19 Nov – Petro Schmidt (79) stabbed several times, including her face, during a home invasion in Faunasig, Bloemfontein. She barely survives.
19 Nov – Gerhard Kritzinger (64) shot, tied up, drowned in own blood in a home invasion on a smallholding at Boschkop, Pretoria. His niece Ansu de Villiers (74) tortured with boiling water in the same incident. Gerhard’s wife Rina beaten over the head with a firearm.
24 Nov – Schalk van der Merwe (67) stabbed to death outside his farm house outside Wolmaransstad by 3 men pretending to be sheep buyers. His wife Lettie was wrestled to the ground by 2 women who came with the 3 male attackers, then kicked in the face by one of the men. She sustained serious head injuries.
25 Nov – A single mother of 2, Magda Lombaard, also shot through the window of her house in Mokopane (Potgietersrus). She almost bled to death from a thigh wound and was rushed to a hospital in extremely serious condition.
25 Nov – A part time guitar teacher, Peet van Wyk (46), who stays in a wooden shack on the smallholding of his parents in Bapsfontein, Gauteng shot and left paralyzed by one of 2 attackers. The other attacker beat hom over the head with a spade. Only an old laptop was stolen.
26 Nov – Hans van Rooyen (83) found murdered in his home in Nigel. Neighbourhood Watch chased suspects who fled with Hans’s car but suspects got away in the local township.
27 Nov – Gerrie Nel (68) and his dog both shot dead during a home invasion at his house in Heuweloord, Centurion.
28 Nov – A coloured lady, Michelle Pieterse, died after a brick was thrown through the window of the vehicle she was in on the N1 highway Winelands region.
30 Nov – Dirkie van Zyl, an 83 year old elderly lady, was beaten over the head by an intruder in her home in Hoopstad. She sustained a serious injury, but survives.
30 Nov – Janine Hopkins and Frans Duys died after a mini bus taxi ignored a red traffic light and hit the tandem bicycle they were on in Isando.

2 Oct – A 50 year old woman stabbed, raped and seriously assaulted on a farm at Brits whilst her farmer husband was in town. Her name was not released in the media.
5 Oct – Braam Blignaut dies 4 years after he was shot 4 times during a home invasion on a plot at Rustenburg. He was paralyzed the entire time and developed a severe painful infection in his bones which later necessitated the amputation of both legs. He died in severe pain.
6 Oct – Security guard Dion de Villiers shot and killed in an armed robbery in Krugersdorp.
6 Oct – Well known trauma councillor Dr Mirah Wilks stabbed to death by an intruder in her home in Sandown, Johannesburg whilst her husband was at the synagogue.
8 Oct – Edwin Muller (32) stabbed to death by an intruder in his home in Rietondale, Moot, Pretoria.
10 Oct – Agnes Burns (91) and Rosemary Langton (87) tied up and gagged by intruders who robbed their rooms at the St John’s Stella Londt retirement home in Port Elizabeth. They suffocated to death and were found by day staff. Arrests were made later, including a carer at the facility.
14 Oct – Johannes Petrus van der Merwe (54) found murdered in his Kenton-on-Sea home.
14 Oct – Henfre Nel (50) lucky to survive after an intruder bangs down his window and stabs him repeatedly on a farm at Grabouw.
18 Oct – Henry Coetzee (88) tied up, gagged by home invaders in his home in Lydiana, Pretoria. He suffocates and is found by a neighbour.
19 Oct – Henning (82) and Hilda (80) Schourie beaten to death by an intruder in their home in Sophiatown, Johannesburg.
21 Oct – Chief security officer Bart Coetzee shot dead at the DRD Ergo mine in Brakpan after a gang of 20 black men raided the mine and stole gold.
21 Oct – Johan Reed (34) shot 11 times in an assassination hit in front of the Virgin Active gym in Alberton.
25 Oct – Nico Stapelberg, a paramedic, stabbed 28 times at a cafe on a rural road after he stopped to buy a cool drink. He put on a drip himself and drove himself to the nearest town, Orania, for help.
26 Oct – Well known rock climber David Wade shot dead by armed robbers at a resort at Waterval Boven.
30 Oct – Koenraad Collier, a Belgian citizen, and Alberta van der Meer (74), from the Netherlands, tied up, gagged by Mozambican workers. They suffocated to death. Another 2 Belgians survive the attack. 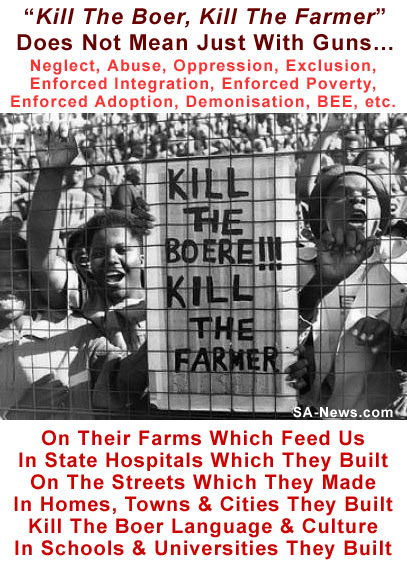