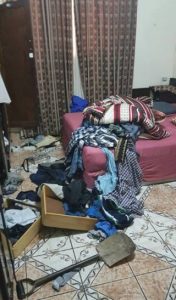 Four robbers to push a five-year-old toddler in the oven if the family did not obey their request to hand over valuable items to them during a house robbery. The incident took place on Tuesday morning at 08:45 in Old Inandaweg in Verulam, KwaZulu-Natal.

According to a statement from Reaction Unit South Africa (Rusa) on their Facebook page, officials were called to the scene by one of the victims. It was established that the suspects had gain access to the house through an open door. They detained the family, a domestic worker and a man hired that was hired to do tile work at home.

One of the suspects apparently had a handgun with him and demanded to see the safe. They threatened to push the five-year-old girl in the oven if they did not meet their demands.

One of the victims led a suspect to a bedroom and showed where the safe was hidden in a closet. According to Rusa, the suspects broke the safe out of the wall with a spade.

They tied the victims with cable ties and ropes and locked them in one of the bedrooms.

Apparently, the robbers fled the scene with the safe, in which there were seven cellphones and an unconfirmed amount of cash.

However, the victims managed to loosen themselves and called for help.