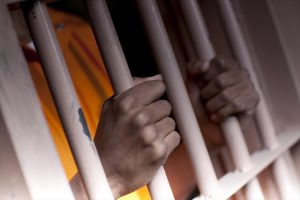 The fighting‚ which prompted prison authorities to call in Department of Correctional Services specialised units‚ is over prisoners’ unhappiness with how issues around parole are being dealt with.

The Times has been given exclusive video of the fighting‚ during which one warder was beaten with a brick for calling prisoners by the K word.

Warders were deployed with dogs‚ electric shields and pepper spray after prisoners‚ who were armed with improvised weapons‚ attacked them.

“According to initial reports‚ offenders were refusing to go into their cells‚” Morwane said.

“They were requested repeatedly to go back to their cells‚ but refused to do so. The inmates then started attacking officials and in the process one official and one offender sustained slight injuries.”

“In line with the relevant legislation‚ minimum force was utilised to restore order and the centre is now back to normal‚” Morwane said.

The riot follows the handing over of a memorandum to the Justice Minister Michael Masuthla two weeks ago from prisoners in three Gauteng and KwaZulu-Natal prisons listing a string of complaints about parole‚ overcrowding‚ poor food and violence meted out by warders.

Prisoners from several Gauteng prisons told The Times that the strike would begin in other prisons in the province from tomorrow (Monday).

“We are gatvol [tired] of the way we are treated. We are not going to let this continue and will do whatever it takes‚ including going on strike‚ to get the minister to address our issues‚” said a Johannesburg Central prisoner.

A Pretoria prisoner said the problems had been a long time coming.

“We are sick and tired of how the parole boards operate. We are treated like animals. Yes we have done wrong‚ and we have been punished‚ but the prison authorities and parole boards continue to punish by not releasing us on parole when we should be.”

He said the strike began when prisoners who were in an exercise yard refused to return to their cells.

“When they wanted them to go back to their cells they refused. The warders started pushing the prisoners back‚ but they fought back. Several of them were armed. That’s when they called in the specialised security warders who assaulted the prisoners‚” he charged.

Contrary to the official statement‚ he said that at least 15 prisoners and four warders had been injured in the clashes.

“One of the warders was beaten with a brick after he called the prisoners the K word. He got what he deserved. He’s lucky he wasn’t killed and the other warders dragged him away‚” the prisoner said.

Morwane said the matter will be reported to the Inspecting Judge as well as departmentally‚ for the necessary investigations to be conducted.