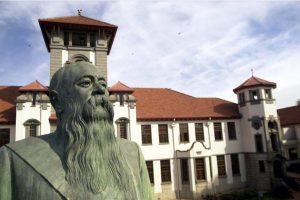 AfriForum and various other conservation organisations, including the Bloemfontein Cultural Association, the Association for Christian Higher Education in Bloemfontein and the Gereformeerde Geloof Bond (which includes congregations across South Africa and to which 32 congregations are affiliated), on 10 May 2019, objected to the issuing of a permit by the Free State Provincial Heritage Resources Authority (FSPHRA).

This permit grants permission to the University of the Free State (UFS) to relocate the statue of Pres. M.T. Steyn from its Bloemfontein campus to the War Museum.

In AfriForum’s appeal against the permit issued, it emphasised, among other things, that the relocation would rather polarise students on campus than to promote respect and social cohesion amongst them.

According to Alana Bailey, Deputy CEO of AfriForum responsible for heritage issues, M.T. Steyn embodies the ideal of the establishment of a Free State university ‒ a goal he promoted diligently. He therefore deserves this form of recognition on campus. This does not mean that other statues of role-players may not be added. However, to remove this statue based on contemporary ideological considerations goes against the preamble of the South African Constitution, which states that the people of South Africa will respect “those who have worked to build and develop our country”.

“It is the duty of an educational institution such as the UFS and the FSPHRA as custodians of the nation’s diverse heritage to ensure that public spaces portray an all-embracing story of the past. Heritage resources in public spaces, including statues, cannot be changed at random by each generation to adapt to a specific group’s subjective opinion or agenda at a specific time. It must be conserved in totality in order that future generations may also add their objective interpretation to it and take note of the sweet and the sour of the past.”

“If the statue were to be relocated, Afrikaans students and staff of the UFS may rightly ask if they would still be welcome on campus.”

Members of the public who would like to support AfriForum’s appeal against the permit and the relocation of the statue are invited to sign the petition of protest here , or to SMS “Steyn” to 42315 (R1).

Read the original article in Afrikaans on AfriForum
This report does not necessarily reflects the opinion of SA-news.