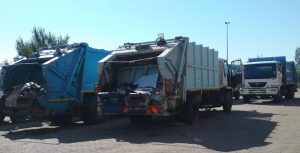 Refuse backlog woes continues to be an impediment to restore Potchefstroom and Ikageng to the clean and impeccable state it was in the past.

Washington Ncogolo, the spokesperson of the waste management employees says although they are trying their best and walking an extra mile to keep the city clean, they are now left with only two trucks to cover the whole areas.

“On 7 May we were using only one truck to collect refuse and waste. On 13 May, the municipality provided us with the second truck.”

He explained that they have 12 teams on the ground for refuse removal. “We have to rotate two teams on two trucks and always have to cover long routes and end up working throughout the night. It is not safe for us, but we are trying our best,” he said.

“The main problem why we are battling to keep the areas clean is the shortage of the trucks. “The municipality promised that in the beginning of May or end of May we will have 6 trucks. We have been waiting since last year. We do not know that if they are still coming. The municipality also promised us after acquiring the 6 trucks they will keep on buying extra two trucks every time to supplement the newly acquired trucks. We are supposed to have 12 to 14 trucks to render effective services to the community,” he said.

When the Herald visited the infrastructure department recently, six trucks that have since broken down were parked in the yard.

Washington says if all the truck were properly serviced they will not sit with this problem. “It’s impossible for one truck to cover three routes in one day; similarly a person cannot work for 48 hours. Therefore we are overworking those trucks. Those trucks are compactors that uses hydraulic. If a hydraulic pipe burst, the service provider that is supposed to fix this is in Jo’burg,” he said.

A catch 22 situation
He says it is catch 22 situation. “On the other hand we believe that the money used to hire vans from service providers to be rather used in fixing the trucks and buy compactors. On the other hand we need that extra helping hand at this moment. At least there were consultations in roping in service providers to assist us. We are grateful for the assistance,” he said.

In this refuse removal crisis, he is asking the community to bear with them because “we know we come to collect refuse in different days and this is one of the challenges. Sometime you’ll find that the truck has already passed your home. We are asking the community that when you see that the truck has already passed to call us back. We will gladly come and take your refuse. Please do not resort to dumping sites because they are further polluting out areas, he appealed.

We do not care about overtime
“During the week with only two trucks we cover Potchefstroom, only in town. During weekends we cover Ikageng, Promosa and the extensions,” he said.

Washington has put to bed the allegations that the workers are always pursuing overtime. “The municipality also thinks we are concerned about overtime. We do not care about overtime. Two weeks ago we did not work for overtime. Our town and township have become dirty. As workers we have decided to stop working for overtime. We will start by working at 07:00 until 15:00,” he said.

Delay of collection of waste due to ageing municipal fleet

Willie Maphosa, the council spokesperson says the Municipality acknowledges that there has been an unusual delay in picking up household waste recently. “This has largely been the result of the ageing municipal fleet that has been prone to frequent breakups.

“Earlier this year the municipality procured six (6) compactor trucks. Unfortunately, however, it takes a while to take ownership of these trucks the company that must deliver on this consignment has to build them from start.

“Meanwhile in order to alleviate the challenge, the Municipality has contracted six (6) more trucks to address the matter. It is hoped that this consignment should be received in the next two weeks.

“It has been difficult for the Municipality to draft and keep to a reliable schedule of pick-up due to the unpredictable erratic operation of the current fleet of trucks. A new schedule will be drafted and communicated when the first consignment of trucks arrives,” he said.

-Potchefstroom Herald
This report does not necessarily reflects the opinion of SA-news.