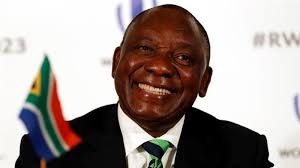 President Cyril Ramaphosa’s reaction on Radio 702 when asked about the hate speech of BLF leader, Andile Mngxitama, is disappointing as he shifted the focus to white people as if to imply that racism is mainly a white problem.

According to media reports, President Ramaphosa implied that racism is not common among black people and that Mngxitama is probably just “a lone voice out there in the wilderness”.

President Ramaphosa also added that “we cannot, through the hatred of some white people then begin to define the whole white community as haters of black people”. And: we must say that those who hate black people and those who are racist must be isolated. We must teach them the best ways to be a nation.

The President’s play on words creates the impression that South Africa’s real problem lies with white people, while in reality, the problem under discussion is Mngxitama’s hateful statements. This also echoes the statements made by EFF members in Parliament, which are on record.

Everyone would, of course, agree with the President’s statement that everyone in the country must be tolerant of one another and must strive to understand and embrace one another. But to say that we are currently building a nation with the ashes of racism, hate and intolerance creates the impression that white people are the only ones who are to blame for all our country’s race related problems.

All while the BLF and its supporters are clearly fanning the flames of racism.

The FF Plus is opposed to any form of racism and if the President truly wants to eradicate racism, then he must not only reprimand white people but also black people. In this case, he should have condemned Mngxitama statements.

He, however, did nothing of the sort. Instead, he played with words in an attempt to project racism on white people. The President is representative of everyone in South Africa and it is lamentable that he let a golden opportunity to condemn racism and promote nation building slip through his fingers.