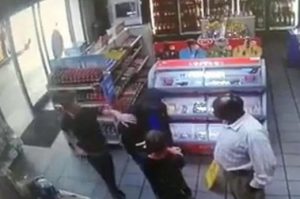 An attack on two young white boys at a gas station in Richards Bay was recorded by security cameras. The mother of the two boys, shared this video on her Facebook profile but is now in fear of reprisals for having spoken out.

In the video, youngest boy scrambles around in a convenience store to get away from a black man. A second man comes from another part of the store and blocks his escape.

The man who blocked the entrance grabbed the boy’s arm while the other man pointed his finger at the boy. At that moment, the boy’s older brother walked in and saw the man was holding his brother in a hold.

The older boy grabbed the man by the shoulder to break the man’s grip. The man then grabbed the older brother while the others slapped him.

A worker at the shop only arrived later and intervened.

The mother said her son became frightened after the man wanted to keep talking to him.

“Our youngest son says the one man kept talking to him and he got really scared when they caught him. His older brother just stepped in and tried to help and was then attacked. ”

She says she believes they targeted her son because he was alone in the store.

“According to witnesses and my son said he didn’t even talk to the man. I do not know if they enjoy doing such things or why. But whatever their reason, it’s not acceptable what they did. That’s sick, man,” she concludes.

SA news editors have searched for the video in question, but we suspect she has removed it for fear of reprisals. The following message is displayed: “Video unavailable. This video may no longer exist, or you do not have permission to view it.”