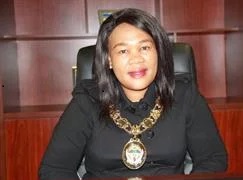 In another example of #TheAfricanWay, it has been revealed that the bankrupt municipality of Mokopane, which is the old Potgietersrus in Limpopo, has spent more than R200,000 on the rental of a Mercedes Benz C-class for the mayor of the town. Andrina Matsimela has being transported around in this luxury vehicle since July last year.

According to information from the Auditor General, the municipality has incurred irregular expenses of R1,17 billion for the last 3 years. There were several violent demonstrations in Mokopane last year which saw residents from the black township march on the municipality and emptying bins in the streets. Shops had to close their doors. The reason for the demonstrations was that residents wanted the mayor replaced. It also seems that the local ANC murdered their own last year in July, when 2 ANC Councillors were shot dead on 23 July last year in the town, while they were sitting in a car. Vaaltyn Kekana, who was the chairman of the municipal accounts committee, and Ralph Kanyane, who only 2 hours earlier had asked that a forensic investigation should be instituted into tender fraud. No arrests have been made…