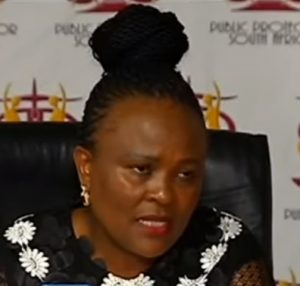 It is clear the Public Protector’s office is doing anything but protecting the public, in fact they are a danger to the public now as its funds are being redirected to defend the Public Protector herself from lawsuits, trying to stop her. In another blow to the office of the Public Protector, this time from within the Public Protectors office itself, a representative from the Free State branch, is accusing Public Protector Busisiwe Mkhwebane of financial mismanagement. A letter was sent to National Assembly Speaker Thandi Modise, asking them to investigate.
This latest whistleblowing was offered by attorney Sphelo Samuel, a provincial representative of the office of the Public Protector. He accuses Mkhwebane of creating an environment of fear, intimidation and harassment. Samuel says systems in the office have broken down due to financial constraints impacting on their ability to do their jobs. He puts this down to money being redirected for Mkhwebane to fight court
battles.
Samuel says “she has budgeted ten million, yet we’ve never had to budget anything like this, because it was not our our goal to fight
battles in court. We relied on our investigations and cooperation from institutions and government and from the 10 million that was budgeted for this current financial year. As at the end of December we had surpassed double that amount, over 20 million times!”
Samuel insists he’s not fighting political battles and says he is not a member of any political organization. He adds: “I am aware of the politics in the country, some of the other things I’m accusing her of is political, you know, a political pattern that she is fighting. If that means I’m
fighting political person so be it.”
Parliament is yet to confirm receipt of the letter whilst the office of the Public Protector says Samuel is one of a group of staffers facing misconduct charges for unrelated offenses…

See also: When Wolves Guard The Sheep: Public Protectors Birthday Party More Like A Who&#8217;s Who of Shady Criminals