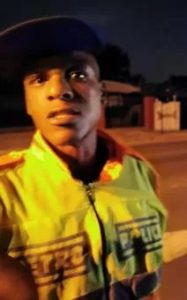 Racist Tshwane Metro police officers are once again targeting white people in Pretoria, but did they mess with the wrong “victims” this time? In another incident which has come to light, black Tshwane Metro Police officers haphazardly and without valid reason pulled off whites in the Pretoria area, then illegally arrested them, assaulted them, swore at them and acted with a clear racial motive.

On Tuesday night Tshwane Metro Police struck again, apparently just because it was white people traveling in the car, because they certainly did nothing else wrong. In the car, a Pajero, was Prof. Andre Thomashausen, a retired law professor from Unisa, his wife and two German friends.

After an evening out the with two German tourist visitors, a Alexandra Von Dehn-Buchwaldt and Arist Von Dehn, Prof Thomashausen’s wife was driving with them in the car. Von Dehn is a retired member of the Mercedes Benz Board in Germany and according to information obtained by Rapport newspaper, Von Dehn-Buchwaldt is a personal friend of the German Chancellor Angela Merkel, who was visiting South Africa. Thomashausen told Rapport that they were already close to their home, when an old rusted bakkie with the words Tshwane Metro on, came speeding towards them on their left hand side. The driver made aggressive hand movements towards them in an apparent attempt to pull them off. The professor said his wife immediately pulled off next to the road.

When approached by a Metro Police member, the Professor opened his window and asked what the problem was. The Metro member shouted that Prof. Thomashausen must get out of his vehicle. The Metro member did not like it one bit when the Prof., being a Law Professor,  asked the Metro member to identify himself and he got even more agitated. Whilst the one Metro member talked to the Prof. on one side, another talked to his wife on the other side. The Prof agreed with the one Metro guy to go to the Lyttelton SAPS, whilst the Prof’s wife got permission from the Metro member on her side to pull into the entrance of a nearby security village. The confusion led to the Prof’s wife pulling away after which the rusted Metro bakkie violently cut in front of the Pajero.

All hell then broke loose as the Metro members violently pulled both the Prof and his wife from the car. In a verbal exchange, one Metro member told the Prof: “I will teach you what I can do, you white racist“. Clearly the Metro member was on a power trip, although acting completely illegally. The one Metro constable, who the Prof later found out is Cst FN Pahlane, and his colleague loaded the Prof in the back of the bakkie. Just before slamming the door shut, Cst Pahlane told the Prof: “When we get to Sunnyside, we will teach you a lesson that you will never forget, you white sh*t“.

The Metro member then proceeded to drive like a maniac to Sunnyside SAPS, with blue lights on. The Prof. tried to stabilize himself by kicking in his feet on the side, but still got injured when he hit his nose against a metal edge. At Sunnyside, there was an argument with SAPS members there and the Metro members then took the Prof to Lyttelton SAPS. With their arrival at the Lyttelton SAPS, Cst Pahlane asked the Prof: “So, you senior citizen, how did you like that“? The Prof. was released at 05:30 after many arguments between SAPS and Metro members and the intervention of senior SAPS officers.

On Thursday, the Prof. attended a function which Chancellor Merkel, a thoroughly liberal politician, could not attend but which the top 180 German businessmen in South Africa attended. One of them told the Prof. that he should have learned to carry R5,000 cash around with him, like they do, meaning bribe money with which to bribe black cops as it becomes necessary. Of course this comment signals an acceptance and compliance with the corrupt African Way of doing things.

The previous incident which was widely reported, was when primary school teacher Kymie du Toit (28) was driving home one night in December, returning from a house where she looked after children, and was then followed by Tshwane Metro Police who wanted to pull her off. She drove slowly to the nearest garage because she did not want to stop in the dark after a previous incident with fake cops. The one female Metro Police cop slammed Kymie’s head in the ground several times whilst they were cuffing her. They then drove around with her for an hour before detaining her at the Sunnyside Police station. They opened false charges against her which was later dropped by the NPA.

The Rapport tried to obtain comment from the spokesperson from Tshwane Metro Police, Isaac Mahamba, on the illegal arrests, assault and racist behavior towards Kymie du Toit and Prof Thomashausen, but he did not answer an emailed and telephonic request for comment.

Kymie du Toit, through her lawyer, is pursuing a civil suit for damages of at least R 750,000 against the Tshwane Metro Police and will also pursue criminal charges. If the NPA refuse to prosecute, she will go the route of private prosecution through Afriforum. Kymie du Toit told Rapport she had a recent dream where somebody is trying to push her off the road with a deep abyss awaiting. She said she is still afraid to drive, even in daytime. Everyone should believe her as her experience was real and brutal. As was Prof Thomashausen, his wife and guest’s experience.

All fake charges against Prof. Thomashausen were in the meantime dropped by the National Prosecution Authority. The man in the picture above is the racist cop who illegally arrested Prof. Thomashausen. His name is Cst Pahlane.

Watch here if video does not load: https://www.youtube.com/watch?v=WoUO9QM1h98