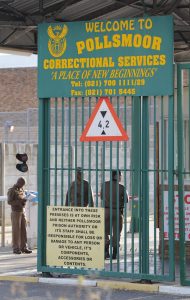 A random search at the Pollsmoor Prison has led to the arrest of a warden for drug possession. The search was conducted on Saturday, 10 August, and the officer was nabbed with 96 mandrax tablets in his possession.

The Medium B official, Bandile Mbana, took the drugs out from his bag during the search.

According to colleagues of Mbana’s, the arrest came as a shock to them.

The special search operation conducted by the Emergency Support Team (EST) of the Remand Detention Facility and the Medium B Centre saw a total of 2000 offenders, their cells and personal belongings searched.

Mbana was taken to Kirstenhof Police Station, where he was arrested and locked up.

He appeared in Wynberg Magistrates’ Court on Monday, 12 August and was released on bail of R5000.

He was officially suspended from duty last Wednesday.

The Area Commissioner of Pollsmoor, Clifford Mketshane, confirmed the arrest and said the operation was necessary after growing revolt of inmates against the authority and the high level of corrupt activity expected.

“Tightened security measures and intensified searching of cells conducted here in Pollsmoor led to the discovery of unauthorised, dangerous and illegal items which were confiscated during the search.”