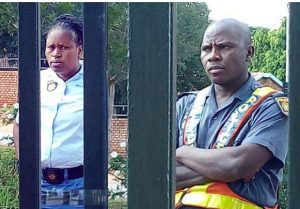 On Monday 16 December 2019, two black men were trespassing on a couple’s property and the Sinoville police attended to the complaint. According to the complainant, Cherize Paice, the police refused to get out of their vehicle and ordered the couple to bring the trespassers to them. The woman said “They had the worst attitudes and were all very racist. I started taking pictures and made a video and the one male policeman came to me and wanted my cellphone, i was then threatened with assault. The female policewoman then started brutally assaulting me in an attempt to get the phone which i had hid in my bra, she was so racist and swearing at me continuously”.

“My word were they not supposed to get out and do their job”?

“I have a serious back problem with rods in and have epilepsy. My seizures start immediately when I get anxious. She made so many racist remarks and was swearing and hit me and grabbed me and threw me on the ground trying to get my cellphone”.

“When my stepson warned her to get off me and leave the yard, she left shouting and insulting white people. I am not leaving this and will proceed to make use of all forums and legal remedies available to me. How can people like this be in a police uniform to serve and protect the public? I want answers and justice. People must know that the police service cannot be trusted at all.”