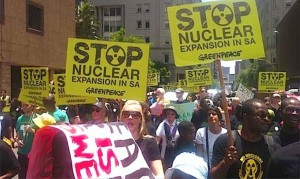 South Africa is interested in realizing a large-scale nuclear project with Russia. However, the country does not have the funds to do so.

The nuclear project was prioritized by former President Jacob Zuma, but the new South African President Cyril Ramaphosa, who came to power in February, ditched the project.

“Once we are clear that this is affordable for us to do, we are open for business including with Russia. I think the approach we will take is to avoid the Big Bang approach. The initial intervention was that we would do close to 10,000 megawatts… It’s unaffordable,” the African National Congress’ treasurer general, Paul Mashatile, said at the BRICS summit in Johannesburg.

The agreement between Zuma’s government and Russia was signed in 2014. Under the $50 billion project, Russia’s Rosatom agreed to build nuclear power stations with a capacity of 10,000 megawatts in South Africa to cut the country’s dependence on coal.

Coal is used to generate 80 percent of South Africa’s electricity. It only has one Nuclear Power Plant, Koeberg which was built by the apartheid era, with a capacity of 930 megawatts, which has been plagued by blackouts over the past two decades, since apartheid ended, affecting the economy. This puts into question whether SA can indeed manage a new one safely… a subject of heated debates during all the anti nuclear protests held in SA since the project was announced.