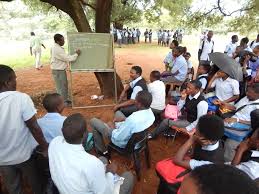 The Liberals has launched a campaign to try the failed education policy of the new SA at the door of Doctor Verwoerd’s policy.

The lies that are spread under the campaign’s banner include:

Only one in three schools has a library.

Only 28% of people over 20 have completed high school.

Among the 25% poorest schools, less than 1 in 100 matrics will be awarded a distinction.

(note: putting facts out of context, or incomplete, is a lie)

Furthermore, it is very easy to quote statistics, to present convenient scapegoats such as “apartheid”, “inequality” or “poverty” as excuses.

So I’m just going to draw a few pencil lines and I encourage readers to protest against this lie campaign.

I will also use the regime’s own investigations, reports and statements to illustrate the true state of affairs:

The reason why there is insufficient school facilities is due to random damage to available facilities by the locals, during so-called “protest” actions.

This devastation is one of two primary reasons why no strategy for SA education will succeed.

The second is the disinterestedness of most non-whites to help their children develop, among others:

Striking teachers – if teachers strike, and parents allow, or when parents themselves prefer to keep their children’s suit to school for “protests”, the necessary consequence is poor pass rates and poor education.

Government inability to deliver textbooks and other aids – due to corruption, repeatedly approved by parents at the polls.

Non-white parents simply spend their disposable money on things other than their children’s education; this has been mentioned many times by the Statistician General during the launch of Stats SA’s 2016 education statistics.

Comparatively, the expected liberal criticism can be answered briefly and vigorously:

Indeed, before 1994, our governments had invested substantially in so-called “white education” – this was done from “white” tax money.

Those same governments also invested billions in other peoples’ education – but infrastructure was constantly ruined (as is still happening) and parents used their children as foot soldiers in the so-called “struggle”, rather than allowing them the opportunity to teach.

Poverty is not a reason for low spending on education by parents:

A large number of impoverished whites still do much for their children’s education and development.

The greatest poverty in our history (after 1902, and during the 1930s) did not prevent parents and communities from doing everything possible for their children’s education.

Parents who were willing to push their ambitions and comfort aside did little with little means!

To quote Dr. Verwoerd out of context is simply because the ANC and the liberal vapor circle have achieved almost NOTHING in SA for almost three decades and are seeking a convenient lightning conductor.

(under English domination there was little non-white education for decades;

from own (non-white) ranks even less; under dr. H F Verwoerd introduced education, funded by the taxpayer, for the first time to all peoples.)