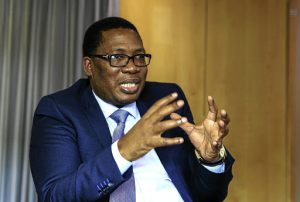 AfriForum’s campaign demanding the removal of Gauteng education MEC Panyaza Lesufi from office began on Wednesday with an online petition calling for his removal.

The minority-rights organisation said it would also hand over a memorandum to Gauteng premier David Makhura at his offices in the Johannesburg CBD on Thursday, in which it will ask that Lesufi be dismissed.

Before handing over the memorandum, AfriForum said it will start by laying criminal charges at the Johannesburg Central police station relating to the education department’s alleged misappropriation of more than R900m.

AfriForum announced on Tuesday that it would launch its campaign to remove Lesufi when it responded to a statement by the department that 14,000 grade 1 and grade 8 learners had not been placed in schools.

The department outlined measures it would take to ensure that the remaining 14,617 prospective grade 1 and grade 8 pupils were placed in schools by the end of the month. It said it was working with “high-pressure zone” schools to increase their classroom capacity to accommodate more pupils.

AfriForum said these measures by the department to accommodate more pupils did not provide meaningful or lasting solutions to the problems.

The organisation said the organisation had been flooded with requests from parents who had had enough of Lesufi’s mismanagement of the school placement process.

AfriForum’s campaign to remove Lesufi relates in part to what it termed as Lesufi’s mismanagement of the online registration and placement procedure for grade 1 and grade 8 learners for the 2020 school year.

The organisation said the criminal charges followed a finding by the Auditor-General’s 2017/18 report, which stated that the department incurred R900m on irregular expenses.

AfriForum said when previous financial years were taken into consideration, the department was guilty of irregular expense to more than R2bn.

In its memorandum to be presented to Makhura, AfriForum will ask that Lesufi be replaced by a person who prioritises quality education, the welfare of pupils, positive support for school governing bodies and the building of more schools.

Lesufi was dismissive of AfriForum’s attempts to have him removed. “The day racists praise you, you must know the revolution is lost!” he tweeted.