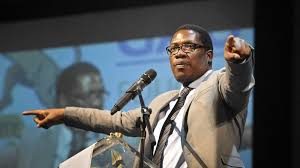 Don’t just blame any old white person though, Afrikaans people in particular, because of their Afrikaans-medium schools.

So, according to Panyaza Lesufi, Gauteng’s MEC for education, the reason children in township schools have to sit on buckets and work on broken desks is because a handful of white, Afrikaans-medium schools.

His argument is that language and creed should not determine whether learners should be accepted into a school, even though Afrikaans – or for that matter English – medium schools teach only in said language. As little sense as that makes to everyone else, he feels so strongly about this that he took it to court… and lost.

Now, back to his comments. Lesufi was being grilled by the DA’s Khume Ramulifho, who fired question after question at the MEC who eventually had to revert back to racial comments, claiming that around 100 000 black pupils had to be accommodated as they could not get into white schools where “language and creed” determined whether or not you would be accepted.

Ok so it doesn’t take a genius to figure that, if you can’t speak the language in which tuition is given, you probably won’t be able to perform very well at that school. Lesufi’s solution? Force Afrikaans medium schools to change over to English…