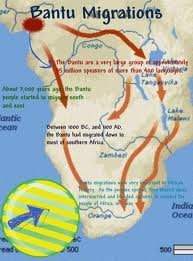 The Out of Africa hypothesis, much propagandised by globalist mainstream media and Establishment, might have finally been inadvertently disproven by the Establishment itself through DNA technology and testing! It is already known Africans do NOT contain DNA from Neanderthals and Denisovans, that Europeans and Asians do, but it now appears Africans have ancient DNA that Europeans and Asians do NOT have either! This would make the much vaunted Out of Africa theory mutually exclusive and thus improbable.

Sub-Saharan Africa is, geographically, the area of the continent of Africa that lies south of the Sahara. The first large-scale study of ancient human DNA from sub-Saharan Africa opens a long-awaited window into the identity and origins of prehistoric populations. Whole-genome sequences of Sub-Saharan tribal DNA shows that the ancestors of the hunter-gatherers interbred, be it through rape or otherwise, with one or more archaic human populations, and contributed archaic genetics that diverged from modern humans around 1.2 to 1.3 million years ago, possibly the now “extinct” Homo erectus, who’s DNA is not shared by modern Asians or Caucasians (Europeans).