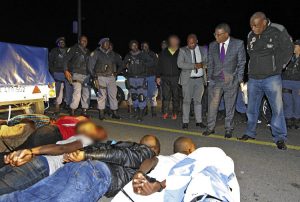 Police minister Fikile Mbalula is an embarrassment after boldly announcing on social media that a significant breakthrough has been made in the Cape.

According to Mbalula, who visited the scene of the arrest, it was a breakthrough in a lengthy investigation process.

Later it was established that it was funeral-goers with a dead body of a relative who was heading to the Eastern Cape for a funeral.

His jubilation on Twitter is now followed by claims of the family for wrongful arrest and humiliation.

The story‚ reported by The Times‚ reads like a Borat sketch featuring a B-list‚ C-grade politician and wannabe celebrity from a distant Banana Republic: ten innocent people en route to a funeral in the Eastern Cape‚ tied up by police and forced to lie face down on a road for three hours until the Minister of Twitter could pick out the right suit (in the end he went with a shiny grey check number offset with a sassy purple tie)‚ roll up with his entourage and pose for some macho pictures.

The suspects were all released without charge on Sunday night‚ but that didn’t stop Mbalula from Tweeting pictures of the fiasco on Monday‚ showing the men’s faces and adding to their considerable distress by opening them up to attacks by vigilantes.

The men‚ who missed the funeral and lost the considerable amount of money they had invested to get there‚ are‚ entirely justifiably‚ planning to sue the Minister and the police.

If and when they do‚ they will join a staggeringly long queue of South Africans seeking damages from the police: every day‚ you and I pay R800‚000 to lawyers and the victims of police ineptitude or criminality; about R300-million each and every year.

Given how much of our taxes are being stolen by cynical parasites‚ I don’t think any of us would begrudge a large amount of money going to each of those men. But if we want anything to change‚ politicians must start paying‚ too‚ and from their own bank accounts.

The police arrested the wrong people. That was an official mistake. But there was nothing official about making them lie in the road and wait for Mbalula so they could be photographed. That part was entirely personal: a stage-managed bit of tough-guy posturing designed to puff up ego of a vain‚ inept man who has spent years playing dress-up in a consequence-free playground. Mbalula tweeted those pictures and endangered the lives of those men so that he could get a few more likes on Twitter.

I know that calling for politicians to pay their own money to the victim of their egos might seem frustratingly pointless: their money is‚ after all‚ our money; our taxes diverted to them in the form of salaries. But it’s a start.

The last few years have confirmed beyond all doubt that most of our “leaders” are only in it for the money. So why not hit them where it hurts‚ right in their shiny grey checked pockets?