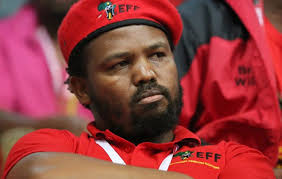 With statements like ‘Any white person who touches us we will send them to hell’, ‘Only land thieves wants us to be de-registered’, ‘BLF threatens to take up arms if IEC deregisters the party over alleged hate speech’, “Mngxitama announces that his primary aim in parliament is to expropriate all stolen land from white settlers’,but you begged last year for donations to get your party on the Voting List, you have such a big mouth about White Afrikaners, you are digging your own grave and you should start to shut the hell up.

Black land First leader Andile Mngxitama has publicly expressed his contempt and hatred for white people in South Africa, says if he comes across anyone he wouldn’t hesitate to use his machete in a viral tweet, to which Helen Zille has drawn the attention of the world to yet another tweet.

The Citizen reported that Mngxitama told journalists that no court would stop the BLF from defending himself against “settlers”.

“No f**k*ng court is going to stop us from defending ourselves against settlers. They stole our land, they make us slaves, now today they are coming to take our dignity, and you believe we will not defend ourselves? That will not happen,” Mngxitama said.

There was a press release blamed “white monopoly capital via the SAHRC” for taking them to court, adding the case sought to have slogans the organization uses, such as “Land or Death”, “by any means necessary” and “one settler one bullet”, declared hate speech.

Among those charged, apart from Mngxitama and the organization itself, are BLF deputy president Zanele Lwana, national spokesperson Lindsay Maasdorp, deputy secretary-generals Tshidiso Tsimong and Zwelakhe Dubasi as well as treasurer-general Thandiswa Yaphi.