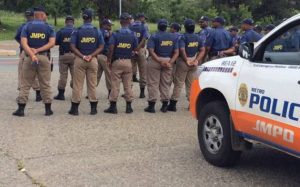 Johannesburg mayor Herman Mashaba took to social media to salute the officer for her ‘bravery’.

A Johannesburg Metro Police department officer has been admitted in Milpark Hospital for treatment after she shot herself in the thigh on Wednesday.

JMPD spokesperson Wayne Minnar said officers chased a silver VW polo from Sophiatown to Parktown and arrested the male driver for possession of an illegal firearm.

“The female officer then put her firearm back into her holster after the chase and accidentally shot herself in the right thigh,” he said.

Johannesburg mayor Herman Mashaba took to social media to salute the officer for her “bravery”.

“Please allow me to wish our officer a speedy recovery. Our residents are honoured to have such a brave & committed female officer within @JMPDSafety ranks @CityofJoburgZA,” he tweeted.