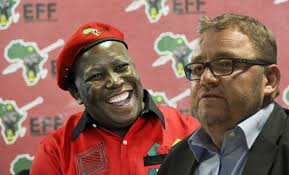 It was reported on 9 June 2019, that Julius Malema and the EFF had just paid a further amount of R109 098,30 to AfriForum to prevent seizure of their assets.

This payment by Malema and the EFF follows after AfriForum’s legal team placed them on terms for it.

This means that Malema and the EFF have paid an estimated amount of R344 000 to AfriForum to date. This amount consists of three of the five orders as to costs that AfriForum has obtained against the EFF in the courts since March 2017.

The latest payment pertains to the order as to costs which AfriForum obtained against the EFF and Malema on 14 November 2018, after the EFF and Malema attempt to obtain an urgent court order (to prevent AfriForum from removing the EFF’s property and auctioning it off) failed. This legal bill has since been taxed and therefore AfriForum was able to enforce the payment thereof.

Kallie Kriel, CEO of AfriForum, will apply Malema and the EFF’s payments to the civil rights organization for court opposition against attempts to amend the country’s Constitution to make expropriation without compensation possible.

“AfriForum welcomes the payments and we will now fight Malema and the EFF with their own money,” says Kriel.

It is estimated that the total of the five orders as to costs amounts to about R550 000. The enforcement of the last two orders is being held back because the one must still be taxed and the EFF appealed against the other.