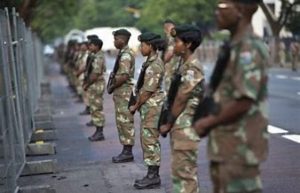 South Africa already seems to have a third-rated army, and its soldiers are not only poorly trained in warfare, but they also have a number of crooks in their ranks.

According to investigators, the recent burglary and theft of a number of army guns could not have happened without the cooperation of army members.

This is not the first time firearms have been “lost” by the military, and opinion-makers believe that much greater clutter is happening behind the scenes that remain to be discovered.

Concerns have been expressed that the weapons could be used in farm attacks and other robberies and that the police will not find the weapons and the culprits on time.

Four years ago, an independent body found that SA’s military had weakened to a level equivalent to what it was in 1930.