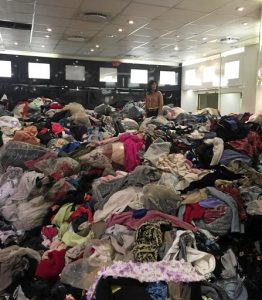 Tons of donations to Knysna fire victims are stuck in a disused shopping centre due to a commercial dispute, leaving needy residents stranded.

Between 4,000 and 5,000 bags and boxes of clothes and linen from across South Africa, some bearing personal notes from donors, are gathering dust more than six months after the devastating fire that left thousands homeless. And, it emerged this week, thieves have been stealing from the hoard.

The problem is due to a dispute between prominent Knysna businessman Jim Parkes and the city council. Parkes has refused to release the donations because of a row over rates and rent.

Parkes owns an old shopping centre which had stood empty for years until it was earmarked as a storage depot for the donations. “The way this thing was handled was shocking,” he said, claiming he had repeatedly asked the council to waive a rates and services bill of between R65,000 and R8,0000 a month because he was storing the gifts.

However, he said this week that he had reached an agreement with the council. “It has all been agreed. I would like this finalised soon. It is Christmas. It [the donations] should be with the people.”

Angry residents blame the council and Parkes for the hold-up and accuse both parties of using the donations as leverage in their struggle.

Ewan Seton, one of hundreds of volunteers helping residents affected by the fire, said: “My fear is that he [Parkes] will seize the clothes and sell them – they were donated as goodwill.”

“The whole thing beggars belief,” said Siena van Schoor, one of several residents who pleaded with Parkes to reconsider his position. “We begged him. These donations were intended to help people, not for Jim Parkes to use as manipulation for outstanding rates and taxes.”

Parkes said he was unable to release the donations because they did not belong to him. “So much stuff was stolen. But I can’t just give access to it because it is not my stuff. Now I am accused of stealing it. There is no way I can just say: ‘Help yourself.'”

Most of the items have been sorted and are ready for distribution, stacked to the ceiling in places.

Parkes, a timber merchant, is a member of one of the town’s most prominent families. He is MD of Geo Parkes & Sons, a timber company founded by his ancestor George Parkes in 1892. On its website the company claims to own “possibly the largest tracts of natural forests in private hands”.

Residents had been unable to persuade Parkes to open his building to victims, said Seton. “We tried to approach him from a humanitarian point of view. Donations like this could make a huge difference.”

Susan Campbell, who lost her home in the hillside suburb of Paradise, said the council also needed to be held to account. “Now they are basically holding the fire victims’ stuff hostage,” she said.

“There were ladies who literally spent weeks sorting through mountains of stuff.

“People from all over the country flooded Knysna with relief. Now it is just left lying there,” Campbell said.

The Sunday Times was unable to visit the building this week. However, video footage shot in October shows Parkes in conversation with residents next to the giant stockpile, which was arranged across several rooms.

Photographs also show rows of boxes filled with various items, including linen and toys. One box of clothes has a fluffy toy on top next to a note saying “New Things Will Grow” – a personal note from the donor.