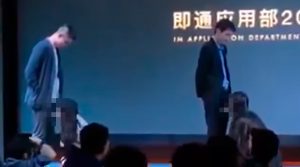 NASPERS owns a 34% stake in the Chinese tech giant Tencent, which is responsible for increasing NASPERS’ market value tenfold in the last decade. The company is facing a massive backlash after footage of a lewd party game at one of its annual events was leaked online showing female employees simulating oral sex on stage.

The video has been heavily criticized online, with many highlighting ongoing gender discrimination in corporate China.

While Tencent employs over 30,000 people worldwide, it currently has no female board members or high level executives.

The event in question was reportedly an end of year celebration organized by the company’s instant messaging/microblogging service called Weibo.

The footage shows two female employees on their knees attempting to remove a plastic cap from a bottle wedged between the thighs of two male coworkers.

The company has issued an apology for the sex game incident and launched an internal investigation, but the response has been panned as lacklustre and insensitive.

The company, which has subsidiaries in social media, gaming, online media, and entertainment, has recently launched a competitor to Apple’s AppStore called WeChat, but the negative PR from this incident will likely overshadow the online launch in the media.