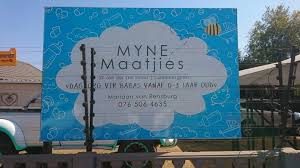 Three people were arrested on Thursday after videos of toddlers at a West Rand crèche being slapped and hit, including at least one child with a broom, were shared on social media.

Parents were fuming after seeing what had allegedly happened to their children at the Myne Maatjies daycare centre.

Police spokesman Col Lungelo Dlamini confirmed to TimesLIVE on Thursday evening that three people had been arrested on allegations of assault.

This was after several statements were taken from parents and witnesses, Dlamini said.

He said that investigations into the alleged abuse at the Myne Maatjies daycare centre started on Thursday.

“A hard drive has also been seized for further investigation. More info will be provided as the investigation develops,” he said.

TimesLIVE also confirmed that the department of social development in Gauteng was investigating.

Angry parents of toddlers at the crèche in Randfontein have removed their children from the centre after videos of alleged abuse surfaced.

A parent, whose name was removed to protect his child, said parents went to the daycare centre on Thursday morning to demand answers after seeing the videos of children allegedly being abused.

“The parents were bedonnerd [fuming] today and everyone is taking their children out of the school there. I am going to put my child in a different school.

“A lot of parents have complained to say that their children are very restless in the evenings and that they have nightmares,” the father told TimesLIVE.

In one of the videos, the kids are seen playing close to a jungle gym. A lady carrying a broom runs after one child and hits the child over the head. She walks away and continues sweeping the stoep.

In a second video, a woman is seen changing one of the children’s nappies. A crying child is seen in a feeding chair behind her. A second woman walks towards the child and appears to hit her several times.

She then lifts the crying child out of the feeding chair and walks away with her. It is unclear where they go or what happens next.

The parent said that his daughter, who is just over a year old, had came home with marks on her body before, but he thought it was just from playing with her friends at school. The father said his daughter has been at the crèche for about seven months.

He said the videos were recorded by the next door neighbour.

“When you drop your child at school in the mornings and she starts crying, it’s not a nice thing. But you just think she is being naughty. But now you can see what the bigger problem was,” he said.

The owner of the daycare centre released a video on social media on Thursday afternoon apologising to the parents. In the video she admits hitting a child on his hands.

“He is a very cute child, but he did scratch a little girl in her face. But I overreacted and something like this will never happen again.

“If it was my child I also would have been very, very angry,” she said.

She said workers who were involved in two other incidents at the creche fled before action could be taken.

“There will be disciplinary action and steps taken against them. Here … the children come first. Once again I just want to say I am truly sorry,” she said.

Gauteng social development MEC Thuliswa Khawe said she was shocked and angered after seeing the videos.

“Let me state this categorically: we condemn such cruelty against children. This is saddening because it cannot be justified.

“Let me add my voice to that of law enforcement and call upon anyone who may have any information about this incident to come forward. We cannot condone such actions,” she said.

Khawe said she and her team would be visiting the families to offer their support.

Police spokesperson Col Lungelo Dlamini said he had sent an investigating officer to the Randfontein police station to get details.