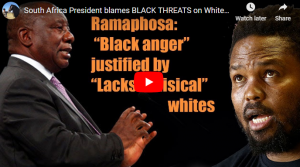 In this video by Willem Petzer we see how the South African president, Cyril Ramaphosa, who on a live interview on 702, said that the black anger is justified and that it is white people’s fault!

Ramaphosa said that black people are now tired of a number of things and that racist acts that are happening are mainly coming from white people. And this all whilst the country is being destroyed and burnt down under the leadership of the black ANC government who has had control for a quarter of a century. But apparently it’s not there fault! How can a white woman Vicki Momberg get jail time for an offensive word but blacks and their leaders can call for mass slaughtering of whites?

A recent example of this so called anger was from BLF leader, Andile Mngxitama, saying that blacks should go out and kill white people, their wives, children and pets. And also from Gcobani Ndzongana who wants to drive all white people of Hermanus into the sea.