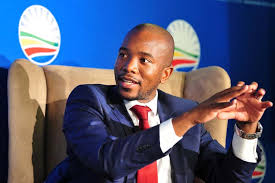 Democratic Alliance (DA) leader Mmusi Maimane has written to National Assembly Speaker Baleka Mbete to convene an urgent parliamentary sitting to debate the ANC’s “deliberate undermining” of the process to amend the Constitution on land.

President Cyril Ramaphosa announced late on Tuesday evening that his party would support an amendment to a section of South Africa’s Constitution to “explicitly” expropriate land without compensation.

“Last night’s announcement by President Cyril Ramaphosa… is a direct attempt to undermine Parliament and is contributing to no confidence in the economy,” Maimane said in a statement on Wednesday.

“This is yet another blow to the almost 10 million unemployed South Africans.”

Parliament is currently in recess and will return later this month.

A ‘reckless policy’
Maimane said Parliament’s joint constitutional review committee, currently touring the country’s provinces to get feedback on the emotive issue, was established “to ensure the voice of the people is heard as to whether section 25 of the Constitution ought to be amended”.

“It beggars belief that while there are still half a million submissions to be processed by the Constitutional Review Committee, and no less than five public hearings still to be conducted in the Western Cape, the ANC has decided to jump the gun, undermine this public consultation procedure, and render the entire process moot.

“It is incumbent on the Speaker of Parliament, as the guardian of this constitutional body, to protect it from being undermined by political machinations and brinkmanship. I implore her to act in the best interests of the country, not the ANC.”

The DA would never support a “reckless policy” that removed economic power from individuals and handed it to a “corrupt government”, he said.

“Land reform is a justice issue, and we advocate for land reform that champions private property rights and empowers individuals – as evidenced in DA-led governments across the country.

“We don’t need a new Constitution clause to accelerate land reform, we need a new government.”

Economy under threat
Maimane also hinted that the ANC was being “led” by other parties on the issue, as it cannot amend the Constitution on its own without a two-thirds majority.

“It appears the ANC is being led by other populist parties who only want to sow division, eradicate property rights, and see our economy implode.

“We call on all South Africans to reject populism and stand up for constitutionalism in building one South Africa for all.”

Maimane finished by saying the economic and unemployment crises, and the almost 10 million jobless South Africans, should be front and centre when making a decision with this kind of impact on the economy.

“Expropriating land without compensation will damage the economy and will lead to many more joining the ranks of the unemployed. Therefore, the DA can never support such a policy.”

The joint constitutional review committee is in Oudtshoorn on Wednesday, and will end its public tour on Saturday with a final colloquium in Parliament.

Thereafter, it will go through all the submissions and start drafting a report to be recommended to the National Assembly before the end of September.