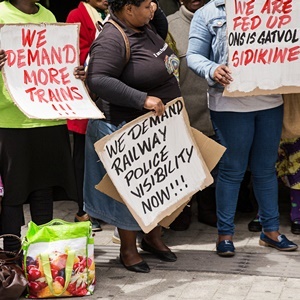 One commuter was shot, according to an eyewitness to the robbery.

Riana Scott, spokesperson for Metrorail, confirmed the incident was reported at 13:42 on Friday.

“Security reported an on-board robbery between Langa and Bontheuwel Station,” she said.

“A commuter was robbed of his belongings and shot in his right leg during the incident. The Railway Police and ambulance services responded and the injured commuter was transported to hospital.”

Corben Mukandi, who was in the carriage, witnessed the robbery. According to him, immediately when the train left Bonteheuwel station, five men jumped up from their seats, with two of the men brandishing handguns. One moved to the back of the carriage, while the others guarded the doors.

“They ordered everyone in the carriage to take out money, cellphones and everything in their bags,” said Mukandi. He surrendered his cellphone and his wallet. The robbers collected the loot in bags.

Mukandi said somehow three women managed to escape to the next carriage where they alerted the security guards. The guards were only armed with batons.

When another commuter tried to escape to the next carriage, he was shot in the foot. “He bled profusely but no one could assist him while the train was in motion,” said Mukandi.

The robbers fled the train when it stopped at Langa station.

The shot commuter dragged himself to the platform. Mukandi then helped the injured man cover his wound with cloth given to him by other commuters.

Mukandi said throughout this ordeal, the security guards stood aloof and did not help.

“We commuters deserve security because we are their customers. They cannot do business without us,” said Mukandi.

Scott said security guards made a statement to railway police and the incident would be discussed this week.