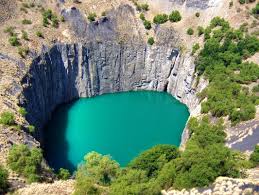 Apparently, the world-renowned diamond city Kimberley’s project to tie the so-called zama-zama gold miners and diamond miners together into a legal structure did not produce good results.

The meeting held in Kimberley became riotous after diggers with arms arrived at the meeting.

The actions of dozens of diamond miners, who illegally exploited the diamond fields without permits, soon struck the national effort to create law and order.

Some of the illegal diggers say they claim their area that has been deprived of them since the 19th century, and the more than 800 diggers who are unlicensed diggers have completely disrupted the meeting.

They work in an area of about 1,500 acres rich diamond field and refuse to give a thumbs up for their “rights”.

A new licensed cooperative structure has been created, but the majority of diggers refuse to join it, while others have apparently been denied shareholders.

The illegal mines and quarries operated by nearly 100,000 zama-zama people cost the country more than R1.5 billion a year, and the government apparently does not have the will to stop the illegal theft of minerals.

One of the attendees at the meeting said they are continuing as in the past, because they need homes, cars, and money, and their children need education.