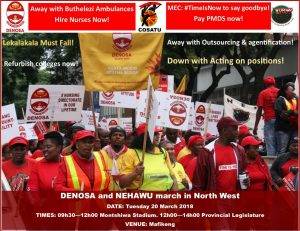 Cosatu on Tuesday said it was deeply disappointed by an announcement that Parliament and government would not be ready to implement the National Minimum Wage on 1 May.

Cosatu said it has repeatedly raised concern that delays in negotiations at Nedlac and Parliament were putting the implementation date at risk and this had now become reality.

On Monday, Labor Minister Mildred Olifant announced the 1 May implementation date for the minimum wage policy might not be attainable as the bill had not yet been tabled in Parliament.

Cosatu parliamentary officer Matthew Parks said the federation had during the parliamentary public hearings requested that several critical amendments be made to the National Minimum Wage Bill.

He said Cosatu had always felt that insufficient time was given to Parliament to pass the three important bills namely NMW, Basic Conditions of Employment and Labour Relations in order to take into account the federation’s and other progressive submissions to ensure meaningful public participation.

“We then requested that Parliament give the processes a few extra weeks to do justice to this process.”

Parks said this would help ensure that Cosatu’s amendments are included in the bills and that the processes are protected from possible court challenges by those who oppose giving workers a NMW.