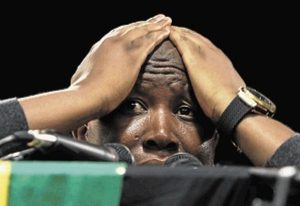 Julius Malema and his Party are in deep trouble, the kind that could potentially harm his electoral campaign. It is the kind of trouble South Africans love to hear about. He will obviously fight tooth and nail against it, but the other good news…he will be tied up in court and hopefully be a little worried which will shut him up for a while.

A US-based NGO defending journalists targeted Economic Freedom Fighters (EFF) leader Julius Malema on after he tweeted the personal phone number of a reporter who has since received a flood of threats.

“The Committee to Protect Journalists today expressed grave concern about threats and harassment against veteran journalist Karima Brown” said the organisation which runs a global network from New York.

“We are concerned about Karima Brown’s safety given the threats instigated by the malicious publication of her contact information,” says Angela Quintal, CPJ’s Africa program coordinator. “The electoral commission must send the Economic Freedom Fighters and all political parties a strong message that using social media to threaten and intimidate journalists will not be tolerated and is a breach of the Electoral Code that could impact the credibility of the vote.”

Last week we reported about the incident that shocked and infuriated South Africans including many of  Malema’s own EFF supporters.