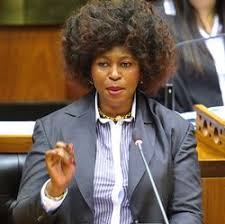 Makhosi Khoza has denied she insulted ANC colleagues following a boycott of a meeting she chaired last week, saying she was responding to their initial taunts.

Khoza was sacked as chairperson of the portfolio committee on public service and administration last Thursday, August 17, after ANC MPs wrote a letter demanding she be removed two days earlier.

ANC chief whip Jackson Mthembu on August 18 claimed Khoza had insulted some of her colleagues in their WhatsApp study group after the meeting, to the point that they no longer wanted to work with her.

The outspoken Khoza, however, told News24 over the weekend that her statements on WhatsApp were only in response to initial accusations in the same sequence of messages by her colleagues that she was a “DA handler” and a “traitor”.

Those initial comments, which News24 has seen, were left out of Mthembu’s version of events.

“How do we attend a portfolio meeting when the chair is not bound by the decisions of the study group? She is a free agent representing her conscience, not the ANC position,” read one of the complaints in the group about Khoza.

Khoza told News24 that she took offence over her colleagues referencing “conscience” as a negative trait, and that had led to her criticising them in the WhatsApp group.

Those she responded to included MPs Mervyn Dirks, Sizani Dlamini-Dubazana and Wilma Newhoudt-Druchen.

Khoza hit back at Dirks, saying he was a “confirmed successful DA recruit”, and that he had contributed to the collapse of the Pietermaritzburg municipality while he was deputy mayor.

She questioned Dlamini-Dubazana’s struggle credentials in the 1980s and suggested she was brought into Parliament because of whom she knew.

She also criticised Muthambi’s record in local government, saying the “less said about her record the better”.

‘We will show her’
Earlier in the day, an initial private meeting with ANC study group MPs and Muthambi was called to iron out their differences, but it was made clear that the majority no longer wanted her in the position of chairperson, Khoza said.

She believed the public fallout that followed was simply part of the campaign to have her removed.

Khoza also said Mthembu was being disingenuous, as he himself had criticised the MPs for wanting to boycott her meeting, labelling their intentions “ill-disciplined”.

When asked how she felt about her position in the party going forward, she said she was “reflecting”.

City Press, meanwhile, reported that Dirks and Dlamini-Dubazana had said they would “deal with” Khoza prior to the meeting.

They had been in conversation with two others in Parliament.

“She has defined herself outside of the ANC, and we will show her. The meeting starts at 2pm, but that meeting will turn into a press conference where she will tell the media how the ANC dealt with her,” Dirks said to Dlamini-Dubazana, which City Press witnessed.

Khoza remains an MP in the party, and said on Facebook on Friday, August 18, that she was looking forward to being an ANC backbencher in the National Assembly.

She said she had “no regrets” about her stand, and that she would not be joining the Democratic Alliance.

“They cannot wait to fire me from the ANC. Eish! I’m also disturbing them from their looting…” she finished.