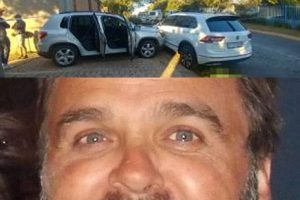 Last Friday 4 May 2018, Ferdie van Greunen and his family arrived at their home in Lynnwoodrif. An unknown vehicle was parked in the driveway. Ferdie got out of his car and approached the unknown vehicle. At this point it became clear that the two people in the vehicle were burglars. One of them ran straight towards the vehicle in which Ferdie’s family was still sitting and attempted to drive away with it, thereby committing vehicle theft and abduction as well.

In the process to protect his family, Ferdie shot the assailant. The second person then got into the unknown vehicle (which later transpired to be a stolen vehicle and full of items stolen from Ferdie’s house) and attempted to drive away, but succeeded only in driving straight into Ferdie’s car, with his traumatised family still inside and the body of the first attacker next to it.

He repeatedly rammed into Ferdie’s vehicle endangering the lives of mrs Van Greunen and her two children still trapped inside.

When he couldn’t get away, he got out of his stolen vehicle and attacked Ferdie. As a result of the ensuing struggle, he was also shot.

Ferdie van Greunen protected his family, his property and his own life. Which was his full right to do.

However, on Monday morning, a large group of protesters gathered outside the Van Greunen house screaming at Ferdie that he was a “murderer” and that they now know his address and “will come for your family.” As a result of this Ferdie van Greunen had to arrange protection at immense cost for his family. A vehicle with armed security guards are now permanently parked outside the house. Despite this, the threats against the family became so serious that Mrs Van Greunen and her children boarded a plane and left the country on Tuesday.

And this is the story of the ANC’s South Africa. The victims of a number of crimes, who defended themselves, are being branded as “murderers” and forced to leave everything behind. There can be little doubt that mr Van Greunen will also be charged with one or the other thing. He has to, otherwise there will once again be an uproar accompanied by protests, looting and burning because “the white murderer” gets away with what he has done.

In the opinion of the protesters the two attackers did nothing wrong. Their political leaders, Cyril Ramaphosa, Jacob Zuma and Julius Malema tells them that Ferdie van Greunen, and people like him, stole what they own from black people and that black people therefore has a right to just walk in and “expropriate it without compensation.” And if white people defend themselves, they are “murderers” and their families may be murdered.

Front National has only a few questions to ask from the governments of the world, who still support the ANC government with tremendous amounts of money:

1) Do you support a belief system where the victim of a crime is regarded as the criminal?
2) Do you support a government encouraging and promoting such a belief system amongst their voters?
3) Do you deny a person the right to defend his family and his own life?
4) Do you recognise the right of a minority group to refuse being subject to such a government and wants to demand self determination?

And if you, the leaders of the free world, are as outraged as we are, why then do you not put an end to this madness before it completely destroys this country and the people who lives here?