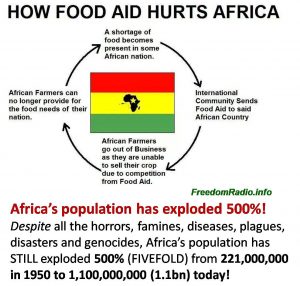 In the new globalist world of the supremacist “Liberal World Order”, it seems drought, famine, disease and the range of catastrophe’s that regularly seem to fall upon poor old Africa, have become very very profitable, well for the corrupt Elites and Despotic leaders anyway…

What did Africa do to cope in the millennia before globalism? Oh yes, it kept its population numbers down and managed the problem… Thanks to Western intervention, Africa’s population has exploded 900% DESPITE famine, drought, plague and pestilence…

In Southern Africa in 2015 and 2016, nearly $350 Million dollars of emergency water and food aid were delivered, in part based on NASA data, to aid millions of people.

As this drought spread across Southern Africa, nearly 30 million people were at risk of drastic food shortages. Four out of 10 people did not have access to clean drinking water, not that they had it before. Something else Africa did not have access to before colonisation was western technology… and foreign aid…

As crops failed and soils were left bare, they used the Terra and Aqua satellites to assess these effects on the vegetation from a local to regional scale. The Normalized Differential Vegetation Index (NDVI) reflects the health of vegetation on the land surface.

With the Soil Moisture Active Passive (SMAP) mission, launched in 2015, NASA has dedicated soil moisture measurements for the first time – and could see this severe drought emerging. SMAP’s highly sensitive microwave radiometer detects the energy emitted by soil depending on how wet or how dry it is. The old gardener’s trick is to squeeze a handful of dirt in your hand and see whether it clumps or falls apart. Think of SMAP doing the same thing – with a lot more precision, all around the world, every 3 days.

SMAP allowed us to see a connection between Pacific Ocean water temperatures and the moisture of the soil in Southern Africa. These measurements are now being put to operational use more than ever. SMAP’s data was fed into the USDA’s global crop yield forecasts – the Foreign Agriculture Service reports that help drive multi-billion dollar commodity markets around the world. In fact, the Foreign Ag Service scientist for this region said that with SMAP they now have the first reliable soil moisture data in 30 years.

As the peak of the drought hits in January 2016, this animations show the low soil moisture conditions in Zambia, Zimbabwe, and Botswana.

The color bar for Soil Moisture Anomaly: reds are areas of lower than normal soil moisture, blues are higher than normal, and greens are normal.

Correspondingly the low vegetation appears in that region as well:

The color bar for NDVI anomaly data set: browns are areas of lower than normal vegetation, greens are higher than normal, and grays are normal.

See also: Decolonised Weather: Amount of Weather Stations in Africa has HALVED in last 3 decades! Where does the Billions in Aid to Africa go?