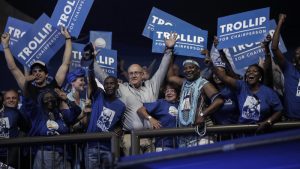 In the hours following the Democratic Alliance’s federal congress last weekend, party leaders boasted that the party had emerged more united and diverse than ever, insisting that the party’s detractors would now be silenced.

Indeed the floor at the Tshwane Events Centre was diverse. That same diversity was not reflected in the newly elected leadership. But what was also glaringly absent in the diverse gathering was the rise of a distinct DA identity.

Political commentators have argued that the DA failed to capture its “new dawn” moment, by emerging from the congress as a collection of groups with different political views, loosely held together by their disdain for the ANC.

The clear, singular identity will become a crucial characteristic to possess when the party begins its campaigning ahead of the 2019 national elections and attempts to forge an emotional connection with sceptical voters in traditionally ANC strongholds.

The congress however, cast questions about what the DA’s identity is. Is it pro-poor or not? Is it committed to diversity or not?

Perhaps the biggest incident that highlighted the DA’s identity struggle was the debate on a proposal to introduce job seekers exemption certificate that would allow unemployed people to opt out of the national minimum wage. The proposal, which drew public criticism and was labelled as anti-poor, was brought forward at a time when the DA continues to push a narrative on its commitment to being a pro-poor party.

Though the party says it rejected the proposal in the end, it was obliged to debate the suggestion, which was brought forward by MP Michael Bagraim and seconded by its new policy head Gwen Ngwenya.

To its disadvantage, the debate has drawn questions about whether the DA’s position as a pro-poor party is a farce, when within its ranks it still has members who would propose and defend policies that suggest the opposite.

Political analyst Susan Booysen said the party was still stuck at a point of struggling to form an integrated identity.

“The DA is a party that is unable to escape from its own factions and is bogged down by its own identity struggle,” Booysen said. “Unlike the ANC which at its conference managed to emerge with a dominant faction, the DA still feels as if it is being pulled at any moment in three different directions.”

The three different directions, Booysen said were a result of the party’s composition of liberals, the influence of a New National Party in 2000 and the emergence of a newer generation of black members who refer to themselves as the “progressive” grouping.

Booysen’s position was echoed by political analyst Somadoda Fikeni who said the party still emerged as a “quilted blanket” of political ideas with no central identity.

“The DA is still a quilted blanket. They say they are diverse but what is the common thread of that diversity? That emotional connection is not there more than the numbers game,” Fikeni said.

“It’s a very strenuous holding on by Bostick or glue of very fragmented groupings with no common ideological or spiritual link other than saying we came here to make the ANC uncomfortable’,” he added.

The party’s Gauteng premiership hopeful Makashule Gana has said that as it continues to grow the organisation will have to start accommodating different political perspectives and forming a new culture, instead of expecting new groups to integrate into a culture that is “too foreign” to them.

Instead of creating this new culture however, the party appears to use the liberalism ticket as a means of warding off divergent political views. Even its diversity clause, which was unanimously adopted was at one stage accused of going against the party’s ideals of liberalism.

Those who have waved this liberalism ticket however, work under the assumption that there exists only one form of liberalism, which all DA should abide by.

The meaning of a DA liberalism is something that has been questioned by Gauteng party leader John Moodey, who had hoped the matter would be debated at the congress.

“What does it meant to be liberal? Just as you have a whole lot of versions of Christianity for example, similarly you have different versions of liberalism,” Moodey said in an interview with the Mail & Guardian earlier this month.

“When it comes to purist liberalism, it talks about the individual. I am an African, even though I do believe in individual rights, it cannot be, for me, in isolation of group rights”.